The press has chattered for years about the replacement of traditional places of worship with secular cathedrals. So, asks this liberal atheist, is it time to treasure the power station at Sant Adrià de Besòs (which is much better than Bankside) and complete the conversion of La Sagrada Família into a mall, adding cheap housing for working class kids?

Michael Rose is a spooky neo-conservative Catholic and an advocate of new Notre Dames. Duncan Stroik says of his Ugly As Sin (2001): “Not since JB O’Connell’s Church Building and Furnishing of 1955 has there been such a complete work on the history, theology and practical aspects of designing the house of God.” However, he remains remarkably silent on the subject of 800MW combined cycle power plants. So which is better, La Sagrada Família or La Sagrada Tèrmica? Let’s make a decision using his trinity of criteria for a good church: verticality, permanence and iconography.

Verticality – reaching to the heavens 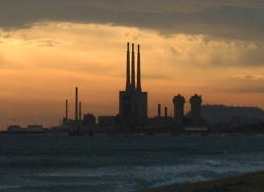 Vertical dogmatists like to quote scripture at this juncture:

And I saw a new heaven and a new earth: for the first heaven and the first earth were passed away; and there was no more sea.
And I John saw the holy city, new Jerusalem, coming down from God out of heaven, prepared as a bride adorned for her husband.
And I heard a great voice out of heaven saying, Behold, the tabernacle of God is with men, and he will dwell with them, and they shall be his people, and God himself shall be with them, and be their God. (Rev 21:1-3)

If we are looking for a gateway to heaven, then we have to look no further than the power station (which coincidentally stands in Sant Adrià’s St John neighbourhood). Unlike the Sagrada Família, which is surrounded by apartment blocks of a similar height, the Sant Adrià plant is uncluttered by architectural shrubbery and is clearly visible from a long way up the coast and inland. It is only bettered in this respect by Norman Foster’s Collserola tower and Montserrat.

The working classes in Catalunya suffered terribly in the C19th and C20th to finance the lifestyles of an ultra-conservative, ultra-nationalist, ultra-rich elite. La Sagrada Família was initiated by and for that particular elite. The private foundation that is completing it is dependent on Korean and Japanese finance, and the building itself is currently a locus for all manner of snakeoil salesmen, pickpockets and the occasional prostitute. It is a shop, a temporal, secular construction. Like a shop, its permanent up-to-dateness means that it is also permanently out-of-date.

Financed by their electricity bills, the power station is of and for all the people. While the planned economic inefficiency that big business and the unions inflict on Spain means that workers here will never attain the standard of living of their Anglo-Saxon counterparts, the power station at least provides them with a fairly reliable supply of electric and – I would argue – spiritual light.

Iconography – the building itself as art 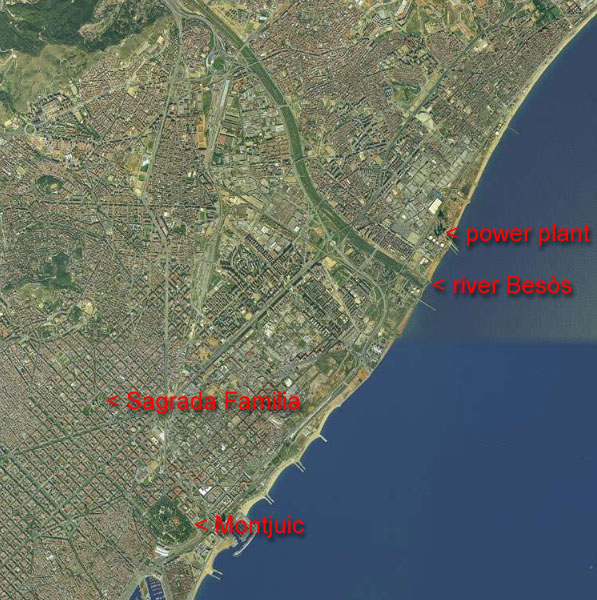 The fundamental value of Les Tèrmiques del Besòs, however, is in the way they lift the souls of those of a religious bent from secular things and bring them into harmony with the heavenly:

1) Their location – huge and alone – at the point where the river Besòs bisects the intersection of land and sea continues the great Catalan tradition of building churches near water sources. There aren’t even any decent bars near La Sagrada Família.

2) While the stacks are known by some locals as the three Marys, failed Calvinistic Methodists like myself prefer to see in them a giant crucifixion scene. This powerful religious symbolism is completely lacking from the mall kitsch of the Sagrada Família. In what should be seen as an act of a humanist genius – rather than a site layout inconsistency caused by a service road – the anonymous architect of the power station situates the central tower slightly to the left of centre. Does this have anything to do with the nearby cottaging zone?

3) But surely, you complain, if this a church that is of and for all the people it should constitute a house of God as well as a gateway to heaven. So where’s the house? And if this is the best church in Barcelona, how come it’s not in Barcelona but in Sant Adrià de Besòs? One answer is that with stacks this big and an excellent climate, you don’t really need to roof a church: the whole hinterland is domus Dei. Another is that there is an excellent symbolic reason why Barcelona’s major monument should be outside its borders: the Barcelona we know was (and is still being built) by immigrants – Andalusians, Pakistanis, Ecuadorians. If the sun went round the other way, I would even be able to wax lyrical about the Pakistanis (there are 20,000 living in the Barcelona metropolitan area) playing cricket on dirt tracks in its shadow of a Sunday afternoon. Instead I’ve put a tenner on Spain edging ahead of Holland in the world rankings in the next five years. 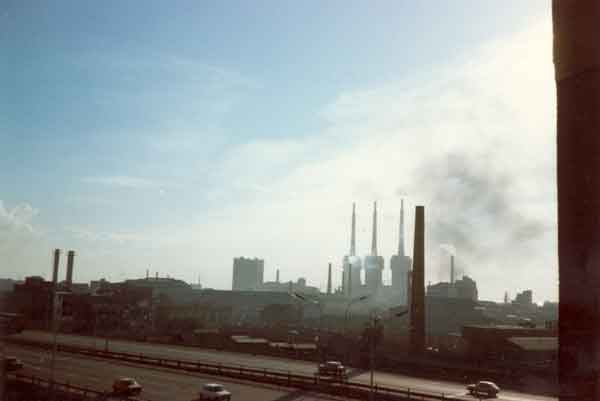 4) Finally, the power station is not just a visual delight: it also breathes and, like Catalan dragons, doesn’t always brush its teeth first. Final proof that true religion resides here and not in the Eixample is to be found among local red and green politicos: while they – fellow-unbelievers all – have embraced the Sagrada Família, they keep using pollution scares as an excuse to try to close down my beloved chimneys. I may have to abseil up one day to save them. Or I may just go up there tonight: the bells, the bells, you see.

Terry wonders whether SagFam is the church of Satan.

Quasimodo goes into a bar and orders a whisky. The barman says, “Bells OK?” “Stop it!” snaps Quasimodo.