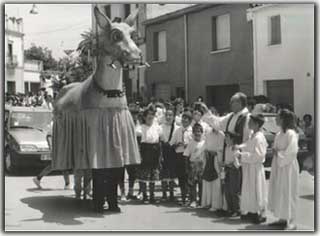 Although Catalonia has donkeys rather as the Soviet Union used to have coalminers, the nation’s poets have tended to avoid the devil’s walking parody on all four-footed things – that’s if we exclude Mr Cervantes and his great chivalric hero, Donkey Hotee. (Am I the only person who didn’t know that Donkey Kong is so-called because of a typo in a translation of Monkey Kong?)

I tend to become somewhat weary and confused during my annual donkey walk, and the finer details of this particular beast’s unstable relationship with the bell-tower and with the people who feed him thistles instead of grass continue to escape me. Donkeys have often had a miserable time in Spain, but I guess they figure that anything’s better than China:

Dr. LeRoy Biehl (’58), former coordinator of the Continuing Education-Public Service unit at the College, recently sent email greetings from China, where he is making his sixth visit as part of an animal health delegation from the University. He had seen the Terra Cotta soldiers and reported eating a lot of good food:
“For lunch and dinner – goose feet (I like them better fried than pickled, especially if there is a bursitis present), shrimp heads (I don’t know who gets the tail), tendon, eel, frog, jellyfish, and I haven’t the slightest idea. Last night, the best donkey I ever ate. Donkey is sweet; [Head of the Department of Animal Sciences Dr. Robert] Easter said there must be a lot of glycogen in the muscle.”

“It is not the ape, nor the tiger in man that I fear, it is the donkey,” wrote William Temple.