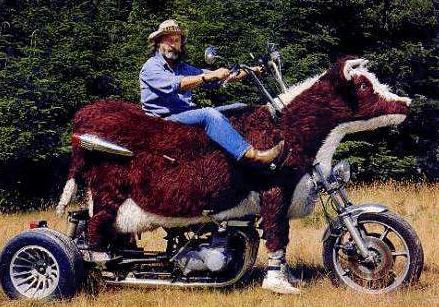 With reference to several recent items (1, 2, 3), Emma Moo-Cow bets we can’t produce a cow on a bike. Well, finding what a number of sites call Cow-A-Saki wasn’t too difficult (anyone know who it is?). However, I think she probably meant a pushbike. That’s harder, but let’s try:

So we failed? No, that means it’s time for the …

Draw a cow and bike picture and then use this form to upload it. Remember it’s August and today is Friday, so take your time and do a really good one. The prize is a postcard (real, not virtual) sent from Barcelona to you or to the person of your choice.

(I will obviously not do nasty things like publishing your email or passing it to others. More on privacy here.)

(There is now an update here and the winner has been announced here.)