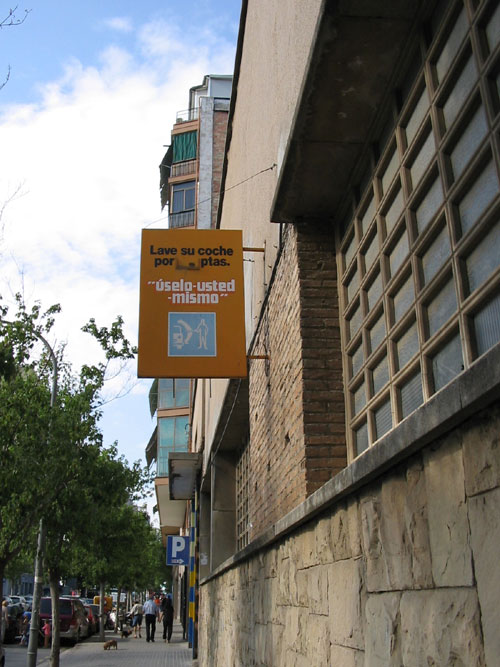 Barcelona’s dog racing stadium, the Canódromo, is an architectonic miracle–in the sense that it hasn’t yet fallen down–but the whole neighbourhood is worth a visit. For one thing it’s full of good local bars which, at this time of year, are principally inhabited by Peruvians and Ecuadorians who haven’t got a masia up in the hills or a village fiesta mayor in Murcia to go to in August. The photo here is taken just along from the dog track. It’s quite big (85K), but it includes two of the major undocumented features of Barcelona: dogs and icons.

In a family-dominated society, little dogs with ridiculous haircuts form one of the relatively few reliable means of making contact with strangers. Once you’ve figured this Fukuyamism out, it becomes obvious why little old ladies shovel sh*t so assiduously, and why 14-year-old girls here are so ridiculously keen to walk the dog at night. Here’s a crap joke:

A new member of the botxes (pétanque) club brings his dog with him. He plays last and lands a difficult ball so that it scatters the opposition, whereupon his dog stands up on its hind legs and applauds.
“That’s incredible!” says the neighbour, “but what does he do if you miss?”
“Somersaults.”
“Really? How many?”
“Depends how hard I kick him.”

Barcelona has no native software industry and all complex technology is imported, so it’s no surprise that there’s no great tradition of infographics here. It took me a couple of seconds to figure out what Darth Vader was up to in the DIY carwash sign above. The logo for the town’s Forum 2004 is, however, a triumph.

People have been drawing and making hands at this end of the Mediterranean for thousands of years now: take, for example, the hand of Miriam (Moroccan Sephardim), of Fatima (Muslims), or of God (American missionaries, reintroducing the five books of Moses); even the Lost Tribe of Portadown has got in on the act on a wall near Sants. Themed around speakers who believe that socialism and progress are compatible, Forum 2004 bills itself as a meeting of cultures. But their hands! That one on the right is either a machine or The Dead Hand of Regulation!

You can find pictures of the next governor of California engaging in contact with humans via Radosh.