It’s being refitted in Barcelona harbour.

A couple of weeks ago, new Chelsea owner (£150M) Roman Abramovich (£3.5B?) bought himself his third yacht, the 115m Pelorus (£72M; photos 1/2/3). Previously owned by Saudi billionaire Al Sheik Modhassan and with a crew of 40 and an onboard submarine (which the security guards didn’t want photographed), it is now undergoing a comprehensive refit in Barcelona harbour by a multinational team including engineers from the Dutch firm, Heinen & Hopman. Not to be outdone, new Barcelona FC president Joan Laporta is having his own mega-vessel worked on nearby. 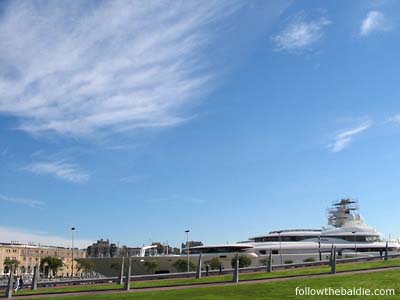 Facts & figures: This Is London, The Moscow Times and old men along the quay.