A brief take on els pastorets. 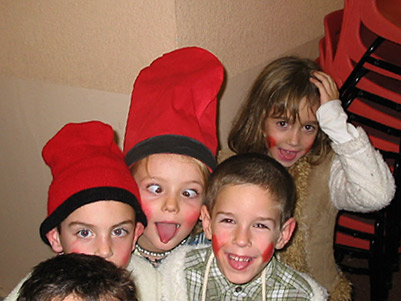 Unfortunately I spent most of my first Catalan nativity play swigging White Rose in a classroom with a couple of shepherds, so my knowledge of what actually happened on Friday night is limited to what I can remember of what Lloquet and Rovelló told me and this photo of mocking demons. Part mummers’/nativity play, part pantomime, part black and white minstrelry (more photos of another show), els pastorets seems to be one of those things that popped up in the late C19th in order to keep Eric Hobsbawm’s publishers happy a century later. Apparently the oldest extant version is from 1880 and in Spanish, with the first surviving Catalan version coming seven years later. One of the most popular (and, apparently, religious) versions was published by Josep Maria Folch i Torres in 1916 and there’s also a version by Frederic Soler, of which I know nothing except that it was published in 1891, but most people seem to improvise fairly freely to suit their circumstances. The shepherds are Catalans whose search for work or whatever takes them on a search round the Mediterranean (or the world), during which they get pursued by hoards of fire-spewing demons and escape the cauldrons of cannibal king Pere Botero, and they end up at the birth of old whatsisname. I presume that some of this comes from quasi-ecclesiastical mediaeval sources and some from C19th colonialism, but I’ll try to stay sober next year to tell you some more.