The excellent Margaret Marks has pointed out some good photos by Michael Jennings of Jean Nouvel’s tower (more scrapers here) for Barcelona’s Agbar water company. (Agbar is one of the many subsidiaries of Ondeo, the water division of dodgy (analysts/lobby) mega-utility Suez.) The tower is located just off Gloriès, perhaps the worst urban development initiative during Pasqual Maragall’s time as city mayor, and according to the project plan was completed during 2003 (not). Here’s a bit from the dreadful Flash-based site:

Lhe [sic] Agbar Tower was born from the union of two fully opposite concepts: the lightness of glass and the massiveness of concrete.

Well I never, as Mr Jeanneret (Towards a New Architecture (

)) might have said.
The artichoke says his work is based on Montserrat. While that’s politically smart, there’s not really much resemblance, either visually or hydrologically, and popular opinion is convinced it’s meant to be either a bullet or a penis, with majority support for the latter. Barcelona’s gay communist Valencian waiters’ clique believes that there will be water flowing down the outside, Hundertwasser style (buy a calendar or the gorilla gets it!), with a secret switch inside with which the resident Mr Burns will be able to generate a spurt skywards. Unfortunately that seems to be urban legend, but there will always be the odd ambient media agency that thinks that placement next to a big tower really is the best way to advertise a girl’s perfect present: 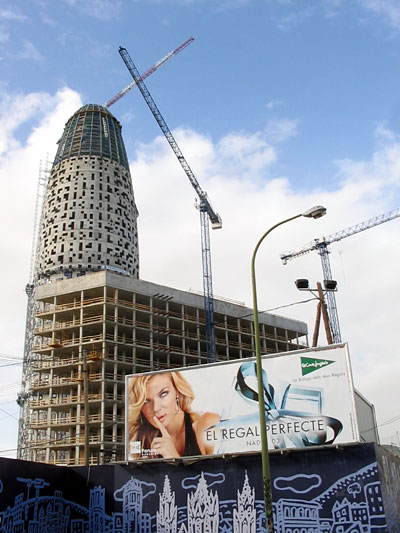 I can’t think of many Parisian nurses who would be taken in by that. This (warning: adult material) is what one kindly mailed me this afternoon. No wonder France is in trouble.