Check this fine interview with Violeta la Burra, courtesy of la Gazza Lazza. To demonstrate to you how much standards have fallen in recent years, here is a picture of one who would follow in her footsteps, despite having neither the legendary looks nor talent of la senyoreta Violeta: 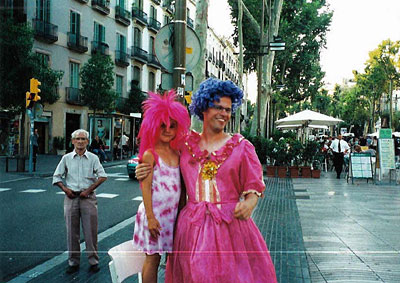 Trébol María Eskatalítico Hik is currently accepting summer season bookings and is contactable via this site. Her repertoire – a pathetic mix of half-remembered African radio ads from the 50s and Low Saxon classics – has more than once (twice) caused great excitement amongst the drunken yobs of Poble Sec.

Paco Villar’s brilliant Historia y Leyenda del Barrio Chino informs us that Barcelona de Noche used to be at Tàpies 5 and disappeared in 1990 as part of the socialists’ clean-up programme, apparently in order to make way for a police station (eh?). Apart from la Violeta, the most dramatic act in this cabaret-restaurant’s history was the assassination on April 29th 1936 of its owner, dodgy impresario José Márquez Soria, known as Pepe, el de La Criolla.

Pepe left his establishment at five in the morning and walked round the corner to his flat on the 3rd floor of Santa Madrona 6. He closed the glass door leading to the staircase behind him and was felled from within by seven shots. The police didn’t find those responsible and, since Pepe still had 3625 pesetas in his pocket, the assumption was that his death was the result of a personal feud. However, the district was quick to link it with police corruption, the murder the day before of Catalan security chief Miquel Badía, and business rivalries in the Barrio Chino. Realistically, it could have been anything: remember that this was in the period shortly after the elections won by the Popular Front and shortly before the army rebellion when public order had made way for gang warfare.