The kinky Murcian waiters clique is anxious to watch rude muscles bulge and divine blood flow in Mel’s Pash and will not be making an appearance today, which means that we need not fear interruption as, for a change, we get random with some really boring stuff.

The most popular and profitable mystery pageant round here is La Passió d’Esparreguera, which claims seventeenth century antecedents and has been running since 1860. Here’s a Bodysnatchers-style press cutting showing the new auditorium built in 1969 which, prior to intervention by the fire service, held more than 2,000 spectators for each of the ca 10 Eastertide performances: 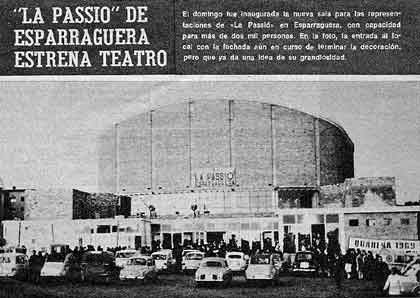 I’m quite fond of it because esparreguera is one of the names used locally for the asparagus plant, the edible part of which is called espàrrec. This debt is acknowledged on the municipal shield and yes, I know what you’re thinking, and no, I’m not going to disappoint you: asparagus is used here as a symbol for masculine and (occasionally) feminine attributes that come in handy at this time of year. Here, from the visitor’s guide for the 1951 season, is what looks like a crop of fine springtime phalli (but which is probably intended to be neighbouring Montserrat):

The usual moans about Esparreguera and others are:

Roughly the same criticisms were made of the plotless, kitschy 1997 film about Germany’s best ever vocal group, the Comedian Harmonists. However, at least the music was good. Here’s a chorus from their celebration of spring, asparagus and sex, Veronika, as played on piano with a descant by Bernard the monk and Zoraima the cat on percussion:

Here, moreover, is a translation of the text, so that all you sweet young things can sing along (bear in mind that there’s a short intro):

Or, in the German: