Akaky over at The Passing Parade lives in fear of the perpetually extending penis promised him by the spammers. No need: we will resurrect The Mighty Thor to deal with this latter-day Midgard Serpent. Here is a taster from an August 1975 story entitled Night of the Troll!, in which Thor interrupts his battle with an orang-orange troll to take on that old sarpent called Jormungand: 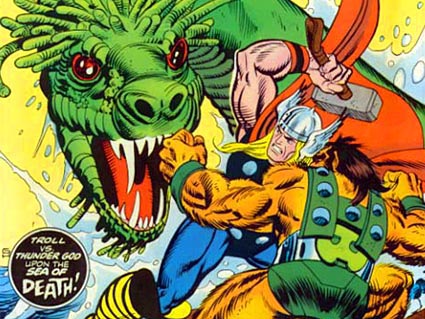 Source: the excellent, The Immortal Thor of Asgard

So there you are, Akaky: if your penis just won’t stop growing, call us and we’ll send round Thor (or Rumsfeld, or someone) to beat it to death with a hammer.