An example of the complete bollocks with which travel sites think you’ll be satisfied is to be found on Travelcreek, which tells us that:

Gerona is the second largest city in the province of Catalunya after Barcelona and is dissected by the Onyar river.

Leaving aside the fact that Catalonia isn’t a province, Girona hasn’t been on the number two spot since before the industrial revolution. Here are the top 10s for 1900, 1975 and 2004, population-wise:

Go on, be honest: how many of you have actually been to l’Hospitalet? Girona, with 79,900 inhabitants, is joint 11th with Cornellà this year (number 71 in Spain), the latter having lost more than 10,000 people in the last 30 years.

There has also been a shift of jobs and people away from Barcelona in the past couple of decades. The following chart–of negligible scientific value–compares the population of Barcelona with the sum total of Catalonia’s next nine cities for the dates above: 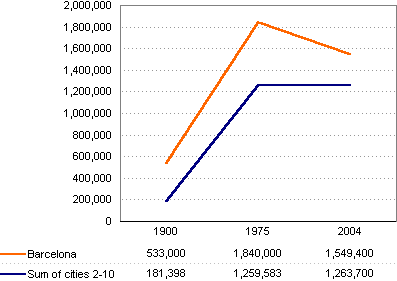