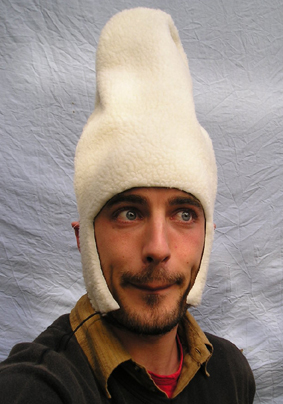 Some people think that Marc‘s headgear is sheepish, others that it is Phrygian. One significant advantage is that, upside-down, it makes an excellent beard. Elsewhere, Jill Bollman writes:

To make my son’s sheep costume, I used a pair of cream-colored long underwear and glued bunched pillow batting all over it. Next, I bought a cream-colored hat with ear flaps, cutting the flaps off and gluing them on top of the hat like ears. Black gloves and shoes stood in for the hooves. Finally, I blackened the tip of my son’s nose with face paint. Not only did he look adorable, but the long underwear kept him warm outside. I rented a Bo Peep costume (staff, hat, and all) from a local shop, and we went as a pair.

We are all getting sheep costumes except for me. I am going simian.