The Catalan government has announced that it is setting up special schools for immigrants and other nignogs in response to the concerns of Catalan-speaking parents, who can’t see the point of enforcing Catalan in schools since the policy (a) has little positive effect on those not inclined to use it, and (b) by including couldn’t-care-less students hampers the efforts of those keen to learn.

Despite 30 years of the “normalisation” of Catalan (which is to say, institutional discrimination against Spanish speakers and big handouts for anyone who publishes anything in Catalan–I believe the new TimeOut here got a golden hallo of €400,000), linguistic errors in Catalan are rife in public communication at all levels, ranging from letters from the regional government–ironically the primary author of the linguistic persecution–to councils where the use of Catalan is more or less restricted to mid- and upper-ranking functionaries, to traders and sign-writers.

I think the most common mistake in advertising tags is the Spanish “es” in place of the Catalan “és”, but I found the following examples particularly telling.

Exhibit no 1, a municipal sports centre tries to spell poliesportiu: 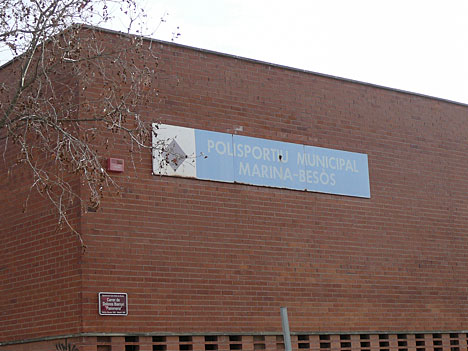 (The street is named after the Spanish Stalinist leader La Pasionaria, famous (except in the Spanish Wikipedia) for announcing in parliament the murder of the leader of the centre-right several days before it happened, and thus confirming beyond a shadow of doubt that a civil war was overdue.)

Next up a Spanish speaker’s literalist interpretation of the standardised Catalan pronunciation of montura, frame: 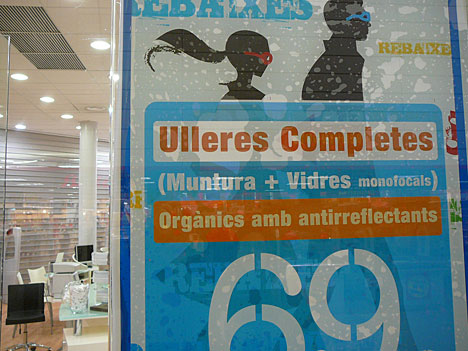 No prizes for spotting the other error. Maybe they need glasses too.

Our following gem, Sant Andria del Besos (Spanish and bad Greek for St Man of Kisses?), as this peculiar local authority is known to local Chinese (ad from the latest edition of the Tonxin Semanário Europeu, a handy mix of sensation and sensation published in Lisbon with a run of 15,000 and distributed across Chinese Iberia): 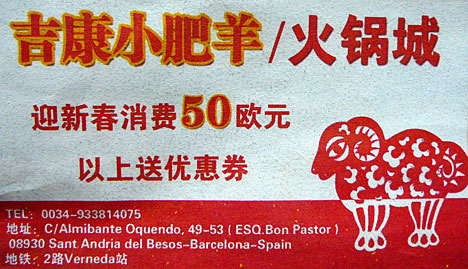 The Generalitat hasn’t as yet sent a gunboat to bombard Shanghai.

Finally, a regrettable instance of guerrilla respelling of Catalan to make it approximate to bad Spanish, in the predominately Spanish-speaking Barcelona district of Canyelles: 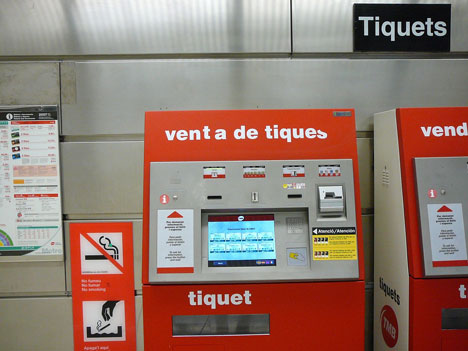