Ulysses: “I suppose the people gave him that nickname going about with his tube from one woman to another.” Junius Henri Browne wrote in 1873 that he “gained a much worse reputation [in the US] for licentious stories than he deserved, from the spurious and prurient rubbish that used to be put off on the American public as translations of his works… Privately, he was represented as an amiable, kind-hearted, conscientious man, who often expressed annoyance at the forgeries practiced upon the community in his name, feeling conscious, perhaps, that he had no reputation to spare—as indeed he had not.” You never know with these writer johnnies.

Pablo de Kock was the second foreign novelist best represented in Manuel Saurí’s bookstore (now a music shop) on the corner of Regomir/Regomí and Ample/Ancha in Barcelona in the year 1849, ahead of Pío Baroja’s favourite source, Eugène Sue, and various other greats, and only behind the indefatigable Pigault-Lebrun:

I wonder whether Balzac was jealous; here he has corrupt traders inventing a market in de Kock. There’s a mildly amusing short story by the latter here, and here’s a picture of him in full flow: 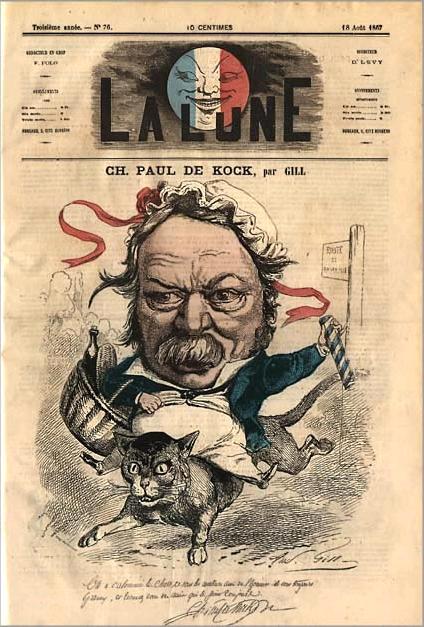 It hardly requires noting that French was the language of fictional choice then in Barcelona, with 40 titles translated from that language and only 8 from English. Foreign authors seem to been better brand managers than Spanish ones, whose names are frequently omitted. Among the curiosities in Saurí’s catalogue, contained in his Guía general de Barcelona: a volume of five novels, each of which omits one particular vowel.