Sez our foreign correspondent of Bar Agujas d’Ouro in Estremoz, Portugal. Its radical eclecticism picknmixery suggests the architect may have mistakenly interpreted the lack of aesthetic coordination in many cathedrals and other large, old, respectable buildings as the result of a synchronic design choice rather than the typical diachronic process in which committees regret the taste of their predecessors without being able to afford to undo the physical consequences. 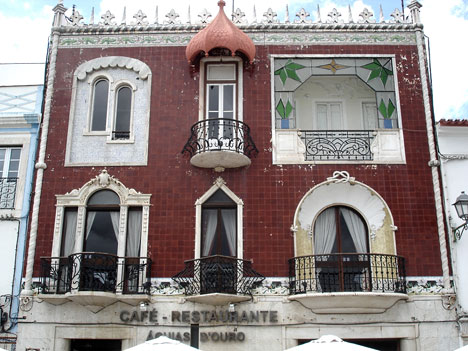 For a man who spent his entire life unsuccessfully waiting for a green light from the town planning department, Gaudí travelled a surprising amount, and was once observed snogging a cliché blonde capitalist in a New York lift. It’s Zafón, so read it fast or not at all.

[
What’s with the golden needles? Is this the belief in pre-modern medicine that needles of gold were less damaging to patients than those of steel?
]