From the Swedish Military Archive, this purports to show Vendôme at the head of some 32,000 troops bombarding Barcelona in the final stages of the Nine Years War: 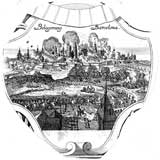 Wikipedia: “The garrison capitulated on 10 August, but it had been a hard fought contest; French casualties amounted to about 9,000, and the Spanish had suffered some 12,000 killed, wounded or lost”. So that’s roughly as bad as the 1714 debacle.

The illustration comes from La Memoria Ausente, a superb collection of 17th and 18th century maps of Spain and Portugal copied from the Swedish archives by 4 Gatos in Badajoz and available for purchase via them. More Barcelona maps here. (Via La Cartoteca, with thanks to SJ for the tip)