The definite article is used to indicate that the object of one’s disapproval is a superlatively scaggy prostitute. In this case we’re talking Barcelona council, which has taken to impounding cars in dubious circumstances to make up its revenue shortfall: 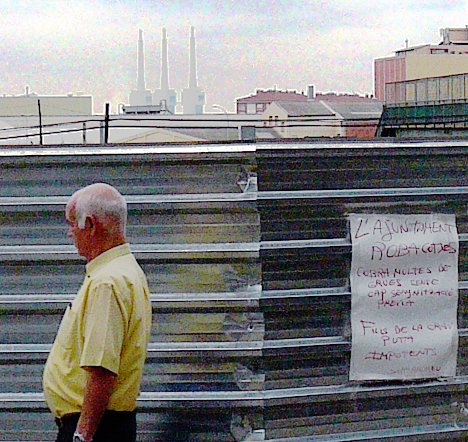 Local Marxist-Papists are not introduced to criticisms of their shameful heresy at school, but closer reading of Revelation clearly suggests that the the Great Whore of Babylon is none other than Barcelona council:

And there came one of the seven angels which had the seven vials, and talked with me, saying unto me, Come hither; I will show unto thee the judgment of the great whore that sitteth upon many waters:
Roman Barcelona stood on a hill, but its subsequent expansion has involved sinking and eradicating numerous water courses and marshes.

So he carried me away in the spirit into the wilderness: and I saw a woman sit upon a scarlet coloured beast, full of names of blasphemy, having seven heads and ten horns.
Barcelona mayors like being photographed on top of fire engines with seven flashing lights and at least ten powerful horns. The current incumbent, Jordi Hereu, is a chubby-cheeked girlie.

And upon her forehead was a name written, MYSTERY, BABYLON THE GREAT, THE MOTHER OF HARLOTS AND ABOMINATIONS OF THE EARTH.
Probably a name badge saying Jordi Hereu, mayor. Hereu’s surname does not come from the Romance word from which also springs the English heir, but is a cognate of the Gothic hôrs, adulterer.

And the angel said unto me, Wherefore didst thou marvel? I will tell thee the mystery of the woman, and of the beast that carrieth her, which hath the seven heads and ten horns.
See above.

The beast that thou sawest was, and is not; and shall ascend out of the bottomless pit, and go into perdition: and they that dwell on the earth shall wonder, whose names were not written in the book of life from the foundation of the world, when they behold the beast that was, and is not, and yet is.
This refers to the double role of the Catalan Socialist Party: federated with the Spanish Socialist Workers Party, but at the same time threatening secession. The bottomless pit is the Carmelo tunnel collapse which inexplicably led to a rise in the PSC vote.

And so on and so forth. Barcelona has seven hills if you count correctly. It is on its sixth mayor since Franco’s death, and Boy Named Sue‘s mandate will only be as long as is required to abolish all power and exploitation. The ten horns on the fire engine are going to make war with Zapatero, who shall overcome them, for he is Lord of lords, and King of kings, and the fire engine will hate the Hereu, and will make her desolate and naked, and will eat her flesh, and burn her with fire.

Most serious Spanish fires are started by firemen, but you already knew that.