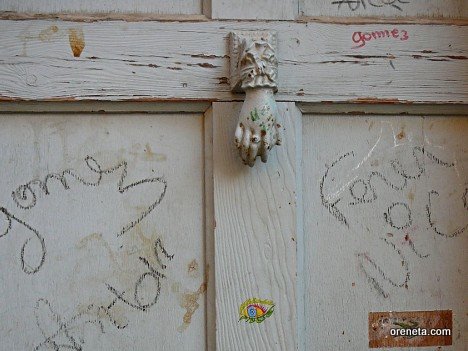 Efforts have been made to erase a sticker of a member of the Incredible Hulk clan. Superimposed on the wooden cross of the door, what a formidable Trinity that would have been! (Anglocabrones often say the eye belongs to Providence. Whatever.)

Sometimes the Eye and the Hand are combined in one icon, as in this Hamsa pendant. This is helpful: doubts as to divine eye-hand coordination only help atheists sow their evil doctrine.

Contrary to beliefs deeply cherished in government offices in Barcelona, the lingua franca in the gypsy neighbourhood in Perpignan is something resembling French, not Catalan. This is almost certainly influenced by the substantial local (Francophone) Algerian population, who the gypsies in many respects resemble, and with whom they have a sometimes uncomfortable symbiotic relationship.

However, Catalan maintains iconic status. So, for example, one will tend to chat in a dialect of the state language but then use Catalanisms for stuff like T’estimy, I love you. This is analogous to the use among the general, generally Spanish-speaking population of Barcelona of occasional Catalanisms like Adeu, goodbye. Like archaisms in any language, these words embed present transactions in the apparently eternal fare of love and leave-taking.

(Here’s a post about a Barcelona gypsy door charm.)