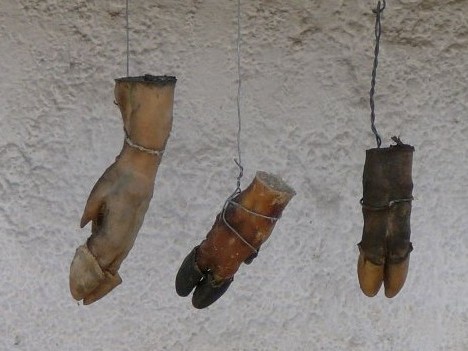 Where to, little wombat?

A Roger Ekirch, At day’s close: night in times past: “suspending the heart of a bullock or pig over the hearth, preferably stuck with pins and thorns”. Barcelona’s inquisition records and other (later) sources also contain a desperate screech of (sometimes living) cats and a wide range of barnyard animals with pins stuck into them and bits chopped off them. I don’t think I’ve ever seen pig feet used before in this fashion in Western Europe, but they have the same function as the hand (and the eye, and perhaps the left nipple) of Fatima. Above, a trinity of them on a garage door in a place dedicated to Francisco Franco’s brother, who was, among other things, a Catalan Republican Left deputy, before he changed sides (and died anyway).

Whether they keep off or merely encourage the demons, I know not, but a pig foot and a bottle of beer constitute a fearsome act: