Xenophobic atavism in the 1640 Reapers Revolt.

The 1640 Reapers Rising in and around Barcelona came as Spain’s fortunes ebbed in the war with France and violent popular protests broke out in various parts of the Habsburgs’ Iberian domains against the impositions of the military. In the war that followed, Barcelona discovered the reality of French promises of lighter government and leapt enthusiastically back from the fire into the frying pan in 1652.

The bloody events of June 7 1640 were reinvented for social and political purposes in the second half of the 19th century, but the fact of prior sources is both more entertaining and enlightening than the subsequent fictions. John Colin Dunlop’s 1834 account broadly follows the classic insider version by Francisco Manuel de Mel(l)o (1654), but his additional research yields some delicious detail. First the efforts of a black servant to protect the Viceroy, another outsider, from the mob:

Everywhere around he heard outcries for his life; and, now hopeless of escape by sea, he retreated with infirm and wandering steps to the rocks of St Bertrand, on the way to the fort of Monjuich. Meanwhile, his palace had been entered, and his flight having become public, he was furiously sought for in every quarter of the city. His unwieldy bulk hindered him from moving with any degree of activity or quickness, especially on the rugged path he had to tread. He was farther disabled by the fatigue he had endured the whole day,—the want of nourishment, of which he had scarcely partaken,—and a hurt he had accidentally received in his rapid escape from the palace. These causes, by retarding his flight, prevented the only chance of escape which remained. Exhausted with fatigue, and tottering with dismay, he had dropped down among the rocks of St Bertrand, where he was soon discovered by one of the parties in search of him. A single domestic, who had been an African slave, and had accompanied him in his flight, was attempting to revive him by washing his face with sea water, when his pursuers came up with him. This faithful attendant, interposing between the ill-fated Viceroy and the band of assassins, endeavoured to shield his master with his own body, and received many wounds in the generous attempt. But his efforts proved unavailing, and the unfortunate Santa-Coloma was despatched on the spot, with five mortal wounds on his breast.

The killing and plundering then began in earnest, and the populace came across something which induced in them the same confusion as was later to beset the people of Hartlepool, or, according to Fiona-Jane Brown, Boddam, near Peterhead:

After this catastrophe, the houses of all the royal ministers and judges were sacked. Of these the richest was the palace of the Marques de Villafranca, commander of the galleys, who had quitted Barcelona a few days before. He was a nobleman of various accomplishments, and was distinguished by information beyond his age and country. But his estimable qualities had procured for him the aversion, and not the esteem, of the multitude. His domestics were first sacrificed to the fury of the mob, who, in proceeding to rifle the house, found, among other curiosities, the bronze figure of an ape or monkey, which, by means of machinery, appeared to imitate the gestures of a living animal, by rolling its eyes, bending its limbs, and pressing its paws together. The multitude, blinded with ignorance and rage, believed this ingenious piece of mechanism to be some diabolical invention. Fixing it on the top of a pike, they carried it along the streets, exhibiting it to the people, and at length lodged it in the Inquisition, as the familiar demon of its master, whom they denounced as a sorcerer and magician.

Atavism was novelised mid-19th century (in Spanish) as progress (people power) in Manuel Angelón’s 1857 Un Corpus de sangre o los fueros de Cataluña and other proto-quinqui literature (check out this piece by Magí Sunyer), and sectarian bigotry was presented 40 years later (in Catalan) as romantic nationalism with the invention of Els segadors and Antoni Estruch’s tableau as respectively hymn and icon of the movement: 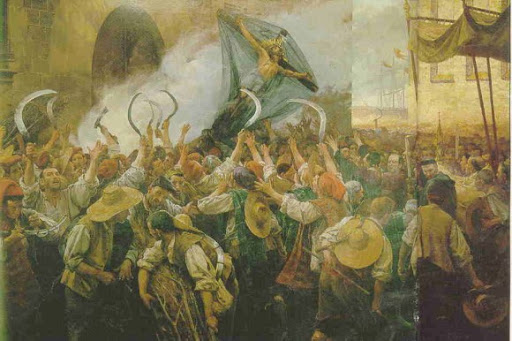 Like all romantic artists, good and bad, Estruch et al are about as wrong historically speaking as they could be. As Dunlop writes, the rioters wouldn’t have been carrying sickles, nor would they have been wearing red monotone Phrygian barretinas:

They used musketoons, called pedernates, which were slung round their waists with a leather belt: they despised swords, which they deemed cumbrous, but they always carried girdle knives. They wore long woollen caps or bonnets, which hung over behind the head, and were stripped, like Highland tartan, with various colours, to distinguish the respective troops to which they belonged. Large wide cloaks, of a coarse sort of frieze called xerga, covered the upper parts of their bodies. Sashes, frequently of silk, were twisted round their loins, and on their feet they had mountain sandals, made of hemp or cow’s hide, laced up to their ankles. In this garb they often left their hills and fastnesses to prey on the inhabitants of the plain.

And, of course, that would have been a monkey on a pike, not Jesus on the cross.

I’ve not seen this suggested anywhere, but I can’t help wondering whether June 7 1640 was not seen as a convenient peg on which to hang the parable in Matthew 13 of the reapers separating good from evil–new Bible translations into vernaculars like Catalan, distributed in the 1830s and 1840s by dangerous subversives like George Borrow, along with falling printing costs helped increase autonomous Bible study amongst an increasingly literate population. The reapers were certainly big in early English (and Welsh, since you ask) Christian radicalism, and particularly during the reign of Ferdinand VII the Barcelona authorities appear to have been subject to paranoias regarding the entry of “foreign” radical religious literature. Here’s King James:

36 Then Jesus sent the multitude away, and went into the house: and his disciples came unto him, saying, Declare unto us the parable of the tares of the field.

37 He answered and said unto them, He that soweth the good seed is the Son of man;

39 The enemy that sowed them is the devil; the harvest is the end of the world; and the reapers are the angels.

40 As therefore the tares are gathered and burned in the fire; so shall it be in the end of this world.

41 The Son of man shall send forth his angels, and they shall gather out of his kingdom all things that offend, and them which do iniquity;

42 And shall cast them into a furnace of fire: there shall be wailing and gnashing of teeth.

43 Then shall the righteous shine forth as the sun in the kingdom of their Father. Who hath ears to hear, let him hear.

44 Again, the kingdom of heaven is like unto treasure hid in a field; the which when a man hath found, he hideth, and for joy thereof goeth and selleth all that he hath, and buyeth that field.

45 Again, the kingdom of heaven is like unto a merchant man, seeking goodly pearls:

46 Who, when he had found one pearl of great price, went and sold all that he had, and bought it.

47 Again, the kingdom of heaven is like unto a net, that was cast into the sea, and gathered of every kind:

48 Which, when it was full, they drew to shore, and sat down, and gathered the good into vessels, but cast the bad away.

49 So shall it be at the end of the world: the angels shall come forth, and sever the wicked from among the just,

50 And shall cast them into the furnace of fire: there shall be wailing and gnashing of teeth.

51 Jesus saith unto them, Have ye understood all these things? They say unto him, Yea, Lord.