Some Swedish silliness from La Vanguardia, followed by a semi-functional justification for so much ant fucking. 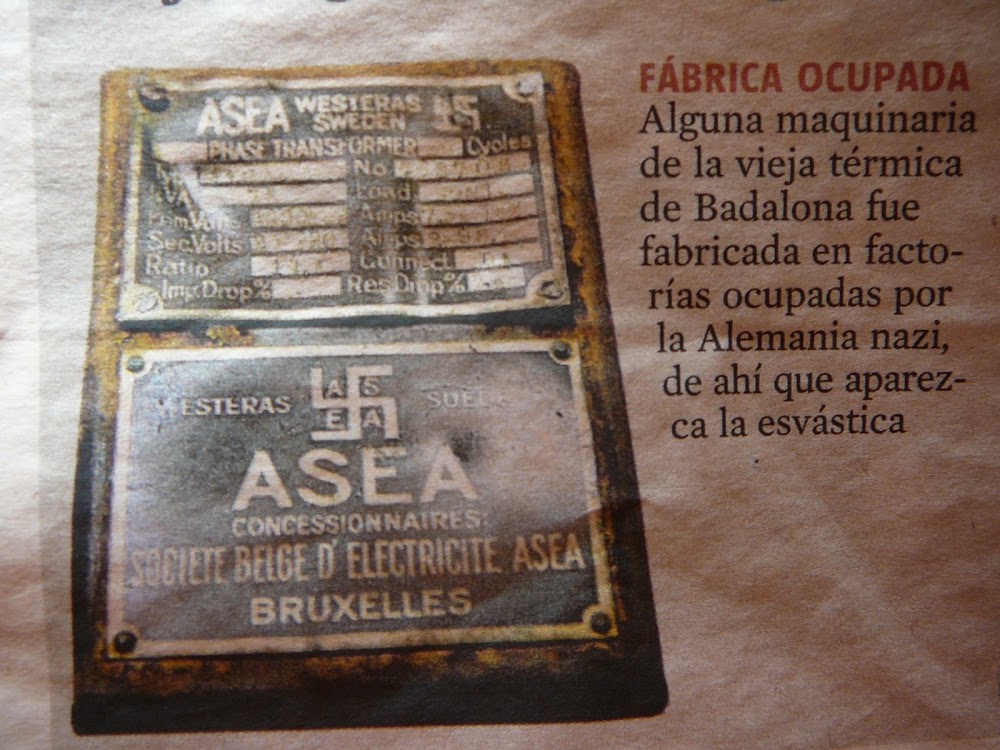 Label for a phase transformer produced pre-1934 by ASEA at its VästerÃ¥s/Westeras plant and acquired second-hand from a Belgian generating company.

Having been made to buy the bloody thing, I had a go at reading La Vanguardia, and so, running the gauntlet of infomercials, I happened to stop for a breather at a feature about the the cataloguing of the past of the great three-pronged devil’s toasting fork power station at Sant Adrià de Besòs as one means of providing for its post-industrial future. “There you can see … the machines constructed in occupied Belgium, which explains why they carry the swastika.”

La Vanguardia or Endesa, pow whap thwack biff bap bap zwapp sploosh klonk urkk swoosh swa-a-p eee-yow ouch kapow ker-sploosh spla-a-t plop urkkk blurp ker-plop: A blind man up the Dark Knight’s arse could see that the branding belongs to the Swedish manufacturer ASEA, not its Belgian generating subsidiary; he might also well know that Sweden was never occupied. And a blind man up the Dark Knight’s arse with internet access hacked into his cranial nerve could discover in a microsecond that ASEA–like the Scouts, Carlsberg and others with which it shared older, perfectly innocent reasons for using this ancient symbol–dropped the swastika from its logo in the early 1930s because of its association with the Nazis (which didn’t stop them doing business in Germany during the war, but anyway…).

The rollicking random nerd interest in this is the use of the swastika as a generic symbol for electrical installations. There’s an example here in the 1924 Globe-Kövess supplement to the Swedish popular encyclopaedia, the Nordisk familjebok, but I have no idea whether this was used elsewhere. ASEA made a lot of money out of transformers, generators and the like in Sweden, but for all I know the icon’s use in cartography may have different origins.

I believe that ASEA was also the principal technology contributor to the Stockholm tram company, AB Stockholms SpÃ¥rvägar, acronymised SS, but we’ll leave the serious press to make a quick buck on that particular conspiracy theory.