With the Greeks clearly doubting whether for them, if not for the megalomaniacs in Brussels, there are stars beyond adversity, I think it’s fairly inevitable a similar mood will develop in Spain, where the IMF wants further substantial cuts and genuine implementation of reforms and the popular view is that for all the talk, and for many the suffering, the promised improvements seem a long way off.

I was talking about this to a friend who works miserably in government on a succession of annual contracts, alongside smug functionaries-for-life, and he said (deep breath) that nothing will change as long and national and regional politics remains dominated by parties with various names but which essentially represent either big business or big unions.

You see, he said, the problem is that, unlike in England where you pay 20€/month social security and don’t have to register for VAT until you earn as much as my head of department, in Spain you pay a minimum of 250€ a month social security, you have to run VAT accounts every quarter, both of which irrespective of whether you’re actually earning anything or not, and there are a host of other administrative requirements.

All of this, he continued, means that unless you’re very sure of yourself, have rich parents, or emigrate you’re never going to break out of the system. That suits big business, which doesn’t want smart competitors, and big unions, which loathe SMEs because they’re incredibly difficult to unionise. And the result is that Spain will remain essentially fascistic and slothful in economic terms (look at Andalusia’s new autónomo law, which is actually about creating more work for civil servants and photo-ops for their political masters! it’s pure 1950s!) and eventually, like Greece, be forced to abandon the euro!

I somehow doubt whether the self-employed could save Spain from the vestiges of national-syndicalism in the next couple of years, but I was curious about the vulgar Thatcherite notion of the UK as a land of opportunity, particularly for keen cyclists, so I compared self-employment to total employment on Eurostat, and the results were rather odd. First own-account, genuine one-person businesses: 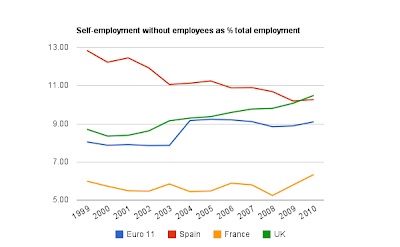 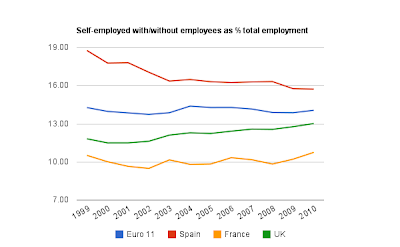 Ah, cried my friend, but you need to exclude the illiterates and the non-entrepreneurial entrepreneurs: virtually all self-employed in northern Europe have degrees, while roughly half of those in Spain have only completed secondary school; and what British builders know of as the false self-employed (registered as such to reduce their employers’ liabilities) exist here as well. Maybe someone else can throw more light, or come up with some more useful numbers.

Obviously economies of scale mean that you don’t want the entire nation to be self-employed, so how do you determine the optimal rate for geographies, professions, age-groups, cultural/moral temperaments? Maybe self-employment just wouldn’t be good for wobbly Spanish civil servants.

(
One amusing detail is in the French figures. Come the presidential elections, will Sarkozy attribute the rise in self-employment to (a) a new entrepreneurial culture born of his welcome, though insufficient, régime auto-entrepreneur reform, or (b) the “refugee effect”, where high unemployment causes people to register as self-employed because they can’t think what the hell else to do?