The other day someone gave me the (impeccable) English translation of Gabriel Tortella’s classic El desarrollo de la España contemporánea. Historia económica de los siglos XIX y XX. I don’t really understand why he uses 1900 to divide the period in two – on the basis of most of the indicators he cites, a tripartite split around 1875- and 1950-ish would make more sense. And it strikes me that better organisation of his statistics might have saved him a considerable amount of explanation. But in general it is extremely informative and entertaining, so by all means buy it via one of the links above and earn me 5% at no extra cost to yourself, etc etc.

Anyway, one of his early points is the long subsequent drag on economic development caused by low literacy rates. He worries that even now that most people can read they choose not to – the following may not have raised a great number of hackles:

Modern Spain is a country that is poorly understood, even by Spaniards themselves. Not generally studious by nature, they distrust the official versions of history (and they are right to do so), but this distrust has often led them to approach history with an attitude of repudiation (and they are wrong to do so).

If the proprietors had attached any importance to the written word, they could surely have had this sign (thanks Anon!) from their hotel near Valencia, a coast stuffed with Brits, fixed for free in five: 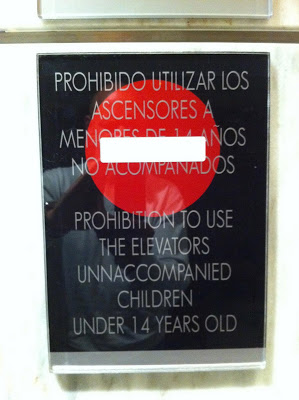 A Spanish problem? Well… for even though native English speakers generally can read and do so with apparent gusto, it is sometimes hard to believe that they profit greatly from the experience – contrast, for instance, Amazon’s US sales and the grinding stupidity of American electoral discourse. One minor phenomenon flitting through marginal vision recently (numbers are lacking) has been the misspelling of the negation of a word which is itself correctly spelled, often in the same sentence. Take unnacompanied / accompanied, and then perhaps take pity on the Valencians.

[
If someone can deal with all this incoherence, maybe they can also explain the historical development of the Three Kings such that, opening their treasure chests, they now offer gifts of underpants.
]