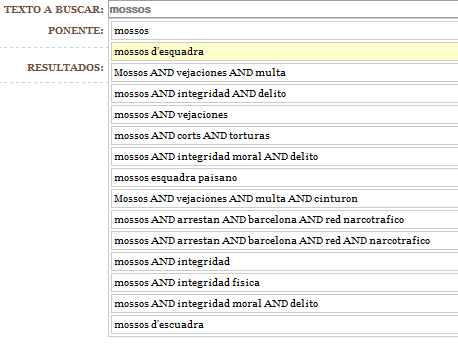 David Maeztu on his excellent legal blog, Del derecho y las normas, points out that the Consejo General del Poder Judicial, the body that governs the Spanish judiciary, uses the same user-search-based auto-complete functionality as Google, for which the latter is suffering a worldwide judicial assault, and which for the former hints at public concerns, particularly regarding the Mossos d’Esquadra, the Catalan “national” police force whose deployment was rushed for political reasons, leading to a relatively high proportion of officers manifestly unfit for purpose.

There are lots of other minor and mysterious gems in there. I was disappointed to find that the Google search for catalana occidente + jabali + hellin provided no more details.