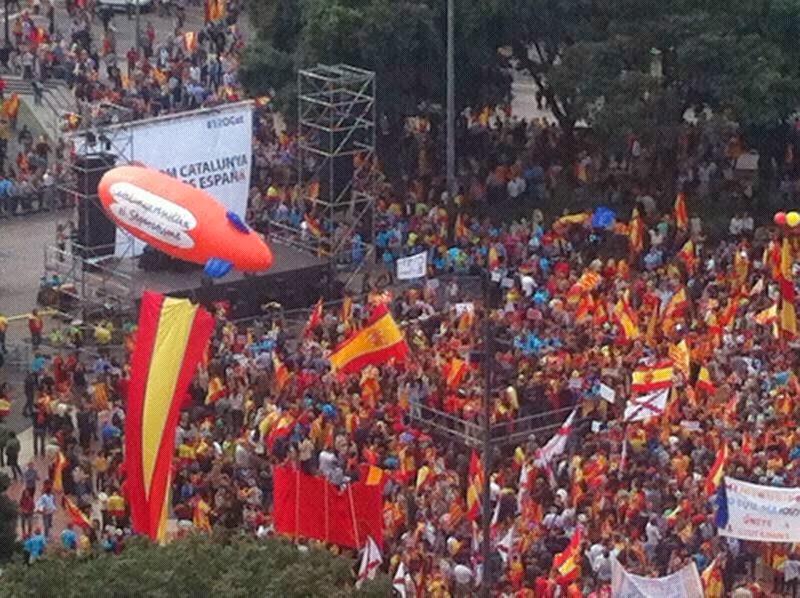 I mean, there are Carlists there, for fuck's sake. Image: Popular Cat.

The CIS has never gone there, but my impression is that if you asked the entire Spanish population what they felt about Saturday’s national festivities roughly 99% would tick “I’m broke, so, defence of our frontiers from Gib aside, why should I subsidise a fucking subnormal goat-worshipping cult?”

OK, Catalanism in Catalonia is Different: the protectionist embezzlers see in independence a safe haven, and have managed to whip up the great and usually amiable mass of the intellectually lazy into plodding along behind the morons and nutcases who will always wet their pants at the sight of the correct number of bars on a piece of cheap Chinese cloth.

But the rest of us – many millions of us – are reasonably sane, honest and intelligent, and we want not a different flag, nor two flags, nor lots and lots of flags, nor a more subtle definition of national destiny, nor to hispanicise Catalonia, nor to catalanise Spain, nor mad totalitarian nuns on the loose, but

OK, there still exists what Vasily Grossman witnessed in the German invaders of the Soviet Union, that

traditional … chauvinism, arrogance, egoism, self-assurance, pedantic care for one’s own little nest, and the iron-cold indifference to the destiny of all that is living on the Earth, from the ferocious belief that [one’s tribe’s] music, poetry, language, lawns, toilets, sky, buildings are the greatest in the Universe…

But I think that – apart from the thieves, halfwits and loonies – that is mainly an old folk’s thing in modern Spain, and I also think that people mostly recognise now that just because they defenestrate barnyard animals in a way that is qualitatively and quantitatively superior to anything seen since some rather messy anthropomorphism in Reformation Prague doesn’t imply that everyone else should have to contribute financially to their little pecado.

How can the fuckwits who organised Saturday’s joke not be aware of this, like, monstrous phenomenon? Jesus!

[
My dear Catalanist friends, yes, I do think you are mad, but so are most of my friends. It’s a cross I have to bear, or, in your case, a bear I have to cross.

Yes, Casal Tramuntana are fascists, but they’re quite interesting: the only three features distinguishing them from other fascist groups like Maulets-Arran are their politeness, their use of two flags rather than one (it’s the niggers I think they hate, not the dagos), and their greater expertise in managing zeppelins (see the photo), which they must have got from somewhere, now I come to think of it. Nazis!

Whatever the thieves do now, their followers are so convinced that Paradise is around the corner that – barring a Rubalcaba coup – there is no going back. I and a friend who normally does snails have started betting on who’s going to get killed by whom, when and where, using weapons supplied by whom, etc etc. Are you reading this, PaddyPower?
]