Now that even those proto-Talibanic Gauls have decided that Queens are A Good Thing, and now that national political clans have made the hop to Brussels (more dosh, less accountability), it’s surely time for a stupid but photogenic nephew-niece of one of the latter to be made King-Queen of Europe, with a view to the introduction of a regulator for Euro-globish, the new, dominant variety of English.

Its first act will probably not be to pardon all the transgressors mentioned here, but we hope it will go gently with Garage Splendit, Av Diagonal (was “del Generalísimo”), Barcelona.

Garage Splendit has been facilitating communications with the underworld for many years, and at least since D.ª Teresa Molins Azcona de Poch’s passage from earth to heaven 50 years ago was announced in this sweet little advertaph: 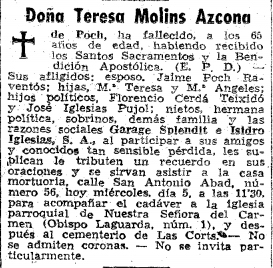 The (from our mundane perspective) misplaced adjective is a Catalanism (in popular speech, Madrid -> Madrit). And, as we are still told, Anglicisms were forbidden during the dictatorship.