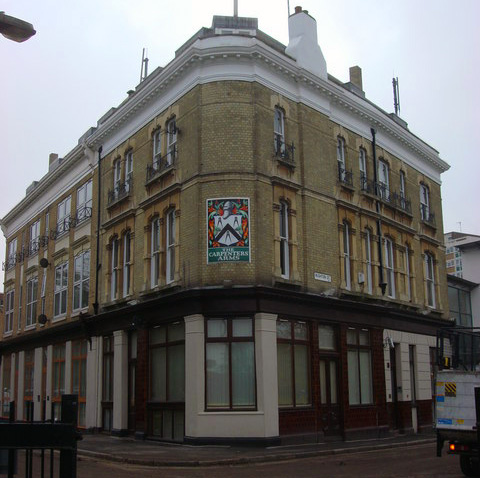 Is this building on the corner of Bridport Place and Rushton Street the original Haggerstone Entomological Society headquarters? Image: Oxyman.

The [London Natural History Society] traces its roots back to 1858, when the Haggerstone Entomological Society was founded in June of that year. By the end of the year it had 35 members, who met one evening a week in the Carpenters’ Arms, a pub in Haggerston, which lies between Shoreditch and Dalston. In 1859 the Society started to meet in a room above the Brownlow Arms, Brownlow Street, which remained its meeting place for 30 years.

In his Presidential address for 1908, A.W. Mera remembered going as a visitor in about 1878 to one of the meetings in a spacious room above the bar in the Brownlow Arms, “each member being provided with a long clay pipe, while the necessary refreshments were provided from below, under which soothing influences the science of entomology was pursued.”

The LNHS seems to have survived, but most bodies begin to decline when they abandon the pub or coffee house or opium den (what a lovely man that Mr Hitler was when I knew him down the beerhall! that Trotsky, he was all right when you couldn’t hear a word he said! no, wait…), and the persecution of smokers and drinkers heralds economic as well as social doom.

Pubs are better than offices, but some pubs are better than others. “Farage’s First Law states that the quality of a drinking establishment is inversely correlated to the refinement of its décor”, and organic generally beats hipster interior design (anti-Ukip feeling in London is essentially a question of style and net worth). In similar vein, foe often beats friend, though this didn’t occur to the 18th century Sir Roger de Coverley:

In all our Journey from London to his House we did not so much as bait at a Whig-Inn; or if by chance the Coachman stopped at a wrong Place, one of Sir ROGER’s Servants would ride up to his Master full Speed, and whisper to him that the Master of the House was against such an one in the last Election. This often betrayed us into hard Beds and bad Cheer; for we were not so inquisitive about the Inn as the Inn-keeper; and provided our Land-lord’s Principles were sound, did not take any Notice of the Staleness of his Provisions. This I found still the more inconvenient, because the better the Host was, the worse generally were his Accommodations; the Fellow knowing very well, that those who were his Friends would take up with coarse Diet and an hard Lodging. For these Reasons, all the while I was upon the Road I dreaded entring into an House of any one that Sir ROGER had applauded for an honest Man.

I wonder, pace the LNHS page, whether PAA’s curious enthusiasm for rosebay willowherb didn’t come from playing on bomb sites as a child.