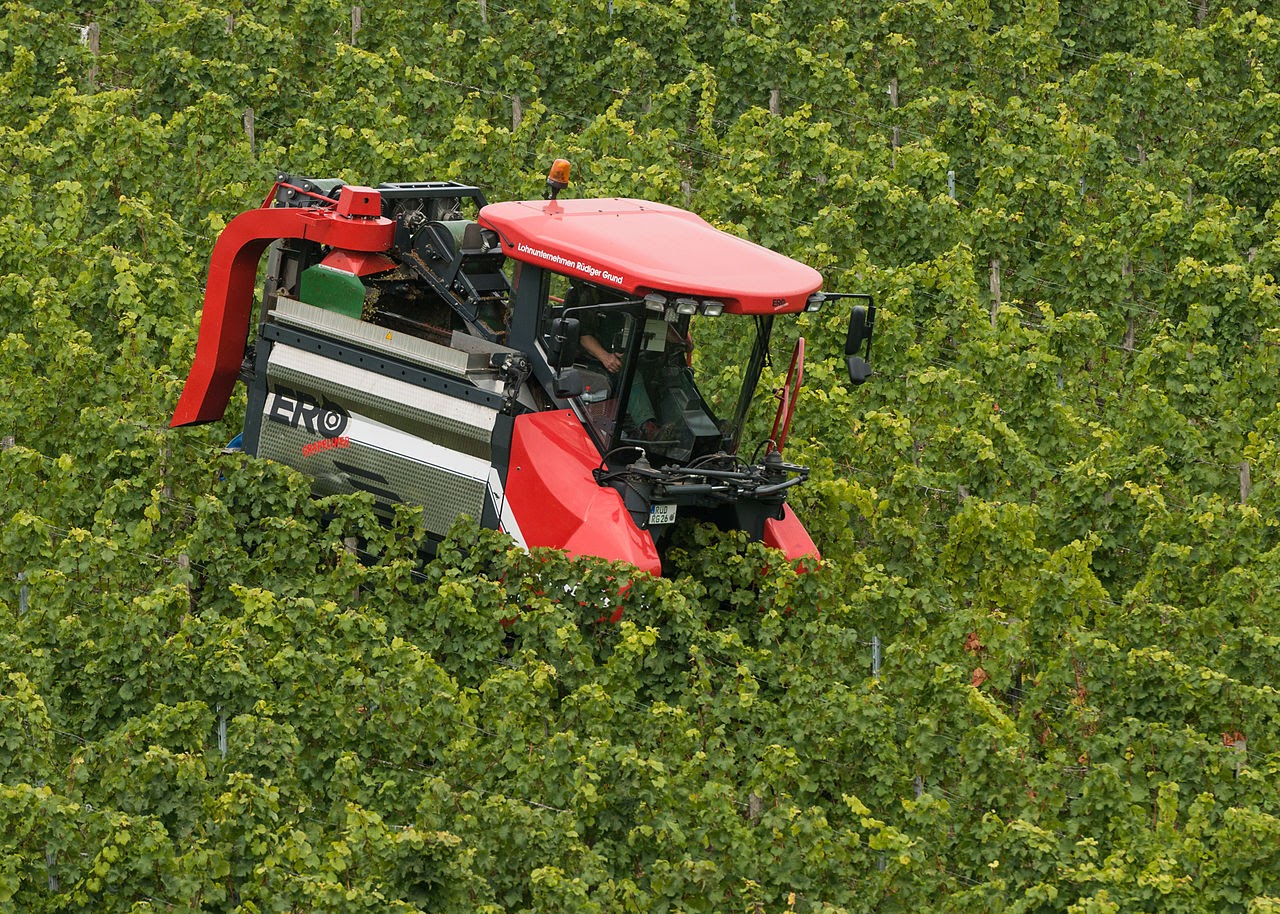 An ERO Grapeliner SF200 in the Rüdesheim vineyards. Image: DXR.

Out walking last week somewhere in Catalonia, I called on a farm which I used to visit with punters in order to taste wine with the mistress, while the master was off amusing himself in town. To my infinite regret she had recently sped along the way generally taken sooner rather than later by conscientious wine tasters, but one of the lads asked me if I’d like to have a go on a new grape-harvesting machine, and I have rarely been happier in the midst of death.

The tractor I best remember is the first one I saw, a grey 1960s double-digit Massey Ferguson in a County Tyrone cornfield, and I only know grape-picking from eight-hour days at 40 degrees with secateurs in one’s hands and one’s head in a bush, while several rows along the gypsies fanny around in their cutis-sparing white Michael Jackson gloves.

But the ERO Grapeline SF200 is a long way from such technology and working practices. And after a couple of glasses I think you will agree that, along with Spanish Easter penance processions and northeast Twente’s carnival wagons:

, it is actually closer to the cult of the god Jagannath. Here’s “Klutz” in 1861 in the Southern Literary Messenger:

“Make way for Juggernaut!”
Towering hideously above his ponderous car, behold the god! What crowds meet, accompany, and pursue.
He moves, he comes, he goes. Right on. Remorseless. Relentless. Inexorable! How shriek his heavy wheels!
“Way for the god!”
O, too devout, ye worshippers. Your thousands throng too close. Ye press too fondly forward-too near those wheels that stop not for bodies nor souls, still revolving mercilessly on. Back! ye multitude, blindly cruel. See ye not that your resistless swerve and sway push many victims to their doom? What matter? Here in frenzy most extreme is one—and another—and yet another—O who shall keep this tally of death! rushing madly beneath the crushing roll of the deity, gladly to awful torture and extinction. The hot blood spouts and flows around. Hear the feet plashing through it. See the car, sanguine to the throne—the god himself a red and reeking monster. Unspeakable agonies. The crack of bones and the grinding thereof. Screamings frightful, heard above shouts of triumph. Horror!
“Make way for Juggernaut! make way!”
No need—is there? Juggernaut makes way for himself. Why should you stand aside? Truly, you are the slightest of obstacles. On, god! On, conqueror—stopless, retardless! The men who make you mighty, fall exhausted in your path. Tread on! Fresh recruits assume the yoke. They fall wearily in their turn. Tramp on them—forward! Make red your road of ruin. En avant, à la mort!
Pass on, Juggernaut—pass on.

Let us ignore the fact that Klutz is actually coining a metaphor for demon drink (Jägerbomb < Jagannath?) and note that, while the SF200 is fitted with:

, and while my model even had the Reichhardt “electrohydraulic drive mode with an automatic steering system via ultrasonic sensors and a tactile sensor,” which appears to work like lane departure warning systems in cars, there is however no attempt to create for a broader public an aural sensation of the grinding, shrieking, grapemonium underway.1

At the very least we need some (Boudiccan) scythe-chariot sound effects at 35:30:

… but I’d prefer amplification (at least calliope strength) and modification of the sounds of the massacre, perhaps run by these people, using the best equipment feasible within Common Agricultural Policy aesthetic budget constraints:

This guy could run the testing programme:

Harvest king? Like the dying-reviving priest-king-gods in Frazer’s The Golden Bough, drivers tend to get slaughtered at the end of the harvest, but have usually recovered from their hangovers in time for the next one. Sitting on a tractor all week is still a hard, because lonely, business.