Whether Cervantes saw it or not, it is possible as he describes. 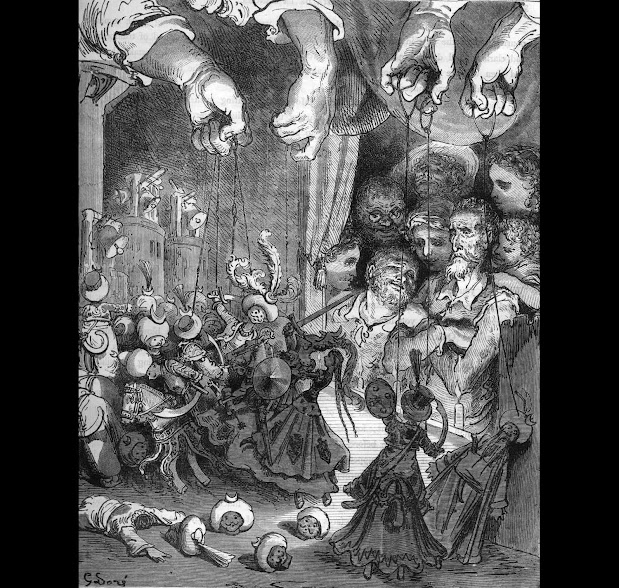 Lovely engraving by Gustave Doré of Maese Pedro's puppet show in Quixote. One problem: Cervantes doesn't mention a 2nd puppeteer. If you stage & string em right, then you can manage two at once, so I guess, Punch & Judy style, you kill off one character & introduce another one pic.twitter.com/TDWu5H5vgC

So how would it have worked?

Some background. The first Italian clown car in Spain, featuring a troupe led by a scoundrel called Il Mutio, is recorded in Seville in 1538, but Italian actors and puppeteers in search of a favourable revenue/bandit ratio seem to have travelled to Habsburg Spain in greater numbers following the conclusion of the Italian Wars in 1559. Why? The Italian states were left a pretty sorry way, France immediately launched into a long religious civil war, and Spain, though officially bankrupt, was still awash with colonial wealth, comparatively safe, and linguistically, climatically, and nutritionally compatible.1

Puppeteers, whether Italians or local imitators,2 played stripped-down, budget burlesques of the dramas put on in theatres and mansions by larger human companies. My sense is that they are comparable to the informal drolleries invented during the closure of the theatres by the English Puritans, and in Mallorca and perhaps other parts of Spain they were allowed to perform during Lent, when human theatres were closed.3 Their inspiration was often religious scenes (see e.g. Cristóbal de Villalón re the 1538 representation by foreigners in Valladolid of the Birth of Christ and the Passion – hence, according to some, but not Covarrubias, retablo, tableau but also altarpiece) or popular romance, as is the case here,4 but also, and to an increasing degree, Venetian or Neapolitan commedia dell’arte, featuring stock characters which recalled Roman comic types. Action was minimalist, reflecting supply constraints and the demands of a simple audience, pace Quixote, that the narrator “go on directly with your story, and don’t keep us here with your excursions and ramblings out of the road.”5

The happy conclusion of all this was the “Poppet-Show” witnessed in 1699 at Mayfair’s May Fair by Ned Ward, “where a Senseless Dialogue between Punchenello and the Devil, was convey’d to the Ears of the Listening Rabble thro’ a Tin Squeaker.”6 But while the 18th century puppet Pulcinella (puppeteer’s right hand) beats everyone else (left hand) to death with his stick before (not) suffering the same fate, Quixote’s Master Pedro a century previous is (still) less firmly unipolar and caricatural, although the personnel requirements are already the same as for the Puchinella show witnessed by Grigorovich in Petersburg in the 1840s: a puppeteer and a narrator, who between them do the sound effects and music.

Doré says that that configuration wouldn’t work (and patchwork writing7 might give grounds for doubt re the piece’s realism). I think he’s wrong, and in this table I’ve mapped Cervantes directions to one puppeteer’s two hands and their blocking on the stage:

At which point Don Quixote ups and destroys the “little pasteboard figures,” leaving “King Marsilio badly wounded, and the Emperor Charlemagne with his crown and head split in two. The whole audience was thrown into confusion, the ape fled to the roof of the inn, the cousin was frightened, and even Sancho Panza himself was in mighty fear, for, as he swore after the storm was over, he had never seen his master in such a furious passion.”

Let me know if you want to try it out: as Maese Pedro says, “operibus credite, et non verbis”. I haven’t yet seen the Falla opera:

… or listened to this Retablo de la libertad de Melisenda by Alain Recoing and Salvador Baccarisse.

Finally, Don Quixote doesn’t seem to have been the only one to lose it with puppets. McCormick, Popular Puppet Theatre in Europe:

Showmen usually aimed at what they perceived as realism, and audiences were frequently drawn into the illusion, confusing the fictional event on the stage with reality. Pasqualino cites various examples of modern Sicilian audiences attacking the hated traitor of the Charlemagne cycles, Gano di Maganza, and recalls witnessing a spectator rushing up to the stage, taking off his shoe and hurling it repeatedly at the puppet. A hundred years earlier, Gregorovius saw a youth hurl a piece of wood at the head of the same character. Sotiris Spatharis, in his memoirs, mentions an episode in 1922, during a performance of Bizat Finds his Brother. In this play, Bizat, brought up from childhood as a Turk, kills the Greek leader, Gavioti, who, unknown to him, is his brother. At a performance in Marousi, a policeman in the audience leapt to his feet, pointed his pistol at the screen and shouted “You filthy Turk”. Quick action by Spatharis’s brother-in-law saved the puppeteer’s life, but a brawl ensued in which both the stage and the café where the show was taking place were smashed up. 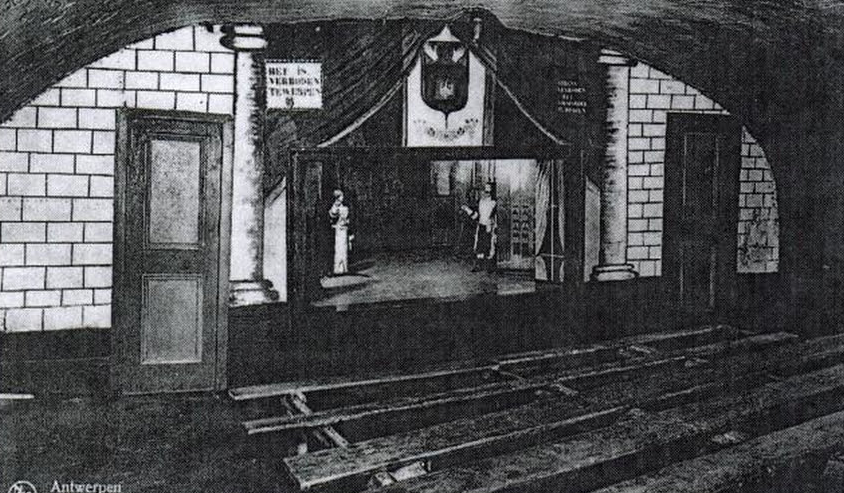