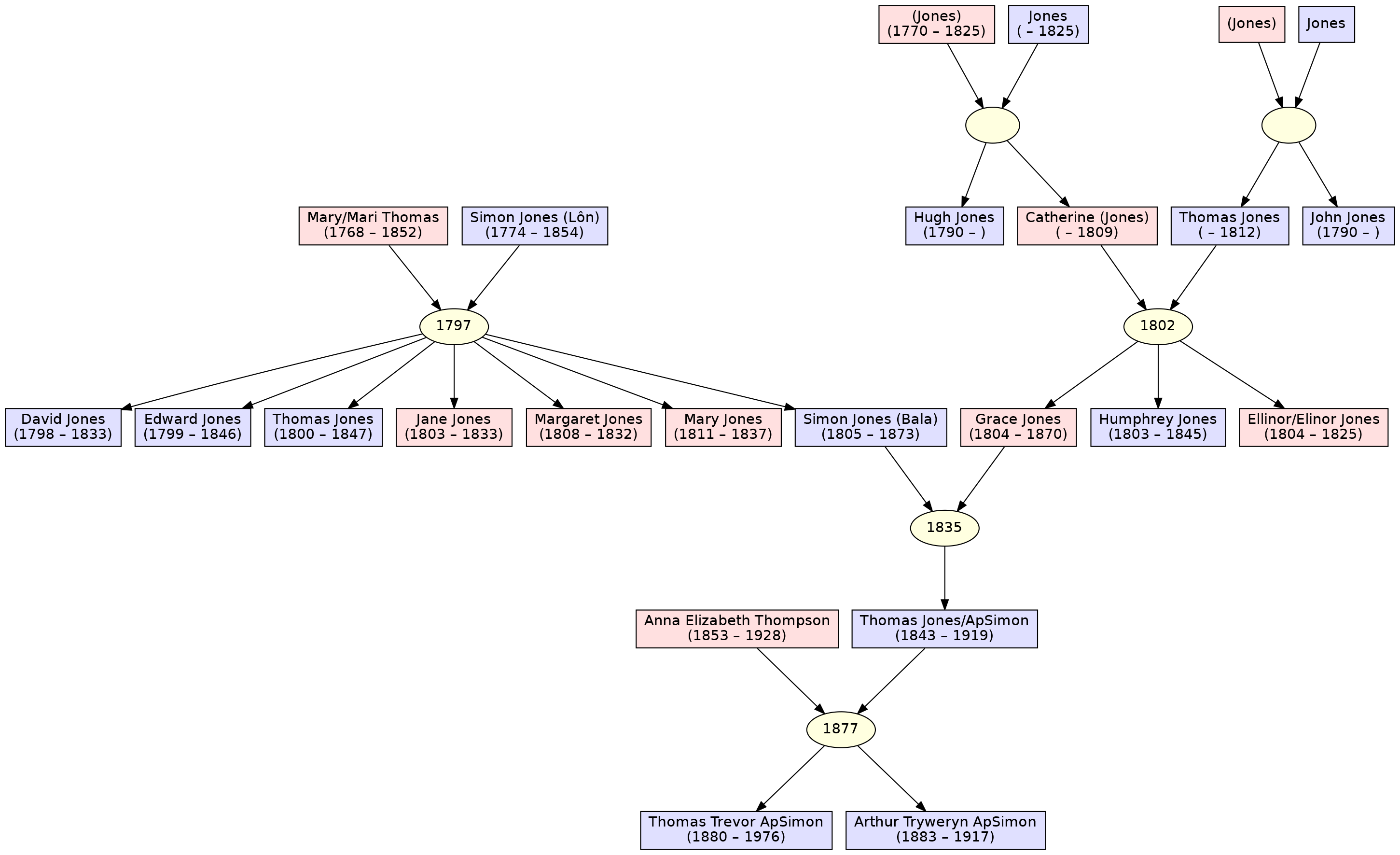 Excerpted family tree showing more or less all those mentioned. Click to embiggen.

AMA thought that the little history that follows was by (Thomas) Trevor ApSimon, while LAD credits TTA’s then long-dead father, Thomas ApSimon. Perhaps the tone and style are not those of TTA’s alert and cynical First World War letters but of a Sunday School reading (Thomas taught for twenty years at the Catharine St. Presbyterian Church, Liverpool) and of the sentimental Welsh-language WWI photojournalism that Thomas published under Trevor’s name, recounting the Sinai campaign and the taking of Jerusalem by Welsh Nonconformists at Christmas 1917. However, it was presumably Trevor who sent the piece to the Liverpool Daily Post, perhaps prompted by Woodham Smith’s The great hunger (1962), and he was more likely than his father to have read Petrarch.

[
Update – 1963 letter from NIA to JEA establishes TTA as author:

Glad you were interested in your Welsh ancestors. What a grim life! There are a few more letters which you can read – when you come as I hope you will – Trevor just wanted to make a brief sketch for their descendants to keep & thought perhaps there might be some antiques about the district who would remember the name. But I think his style is too telegraphic as though 6d a word & makes it hard to catch the imagination of the only faintly interested.

Much will become clearer, and the voracious public appetite for news of early 19th century north Welsh ranters and schismatics satisfied, when I publish translations of the speeches of Simon Jones of Bala; the autobiography of family friend and colourful lichen-gatherer, blacksmith and preacher Robert Thomas, better known by his bardic name Ap Vychan; and an extraordinary manuscript bundle recently received from New York, which appears to be the memoirs of Ap Vychan’s great friend, the blacksmith-poet Thomas Jones, one of the children of blacksmith-preacher Simon Jones of Lôn, Llanuwchllyn, to whom we now turn:

Simon Jones, blacksmith, and his wife Mary, of Llanuwchllyn, at the south end of Bala Lake, found it hard to rear their seven children, born between 1799 and 1812.

These were years of economic crises, a bad harvest in 1810, food scarcity, alternating inflation and deflation. The cost to Britain of subsidising her allies was staggering. So were rates and taxes, half of which were paid by the poor.

Time was to join this family with that of Thomas and Catherine Jones, who lived at Nantfach Farm twenty miles north of Bala in a beautiful and lonely valley, amidst gently rolling hills. Married in 1802, by January 1812 both were dead. 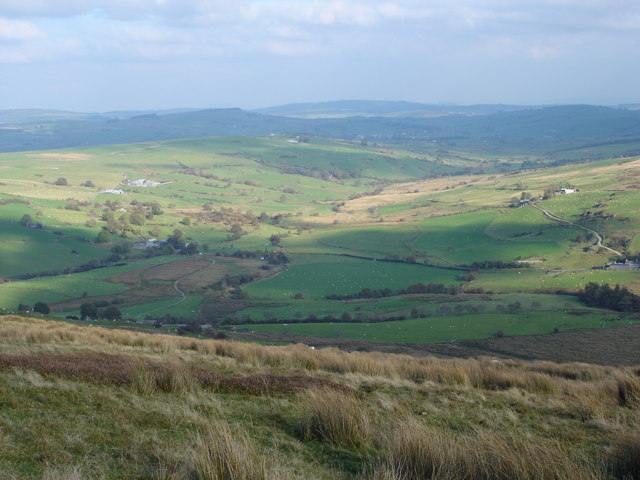 The view from the ridge above Nant Fach farm towards Cerrigydrudion. Image: Roger Brooks.

Their children, Humphrey aged 8 and the twins Grace and Ellinor 7, thenceforth lived at Wergloddu Farm, Llanuwchllyn with Thomas’ brother John.1 Thomas left £329 in trust for the children.2

He also left a library, consisting of one large Welsh Bible valued at £1 15s,3 two small Bibles, two Testaments, one “Body of Divinity” half a dozen other religious books, one by Thomas Charles founder of Welsh Sunday Schools, a Grammar, a Dictionary and twelve magazines.

Humphrey was apprenticed to a woollen draper in Bala for seven years but at the age of twenty was released from his apprenticeship on payment of £30.

Later he says his apprenticeship cost him £100 which presumably included board. In 1824 he went to Liverpool and was soon joined by Ellinor who stayed with cousins at first. The Welsh Chapel took them under her wings like a motherly hen.5

APPRENTICE
On March 14th he wrote (in Welsh):

Dear Uncle, here is Ellin as I wished but with no money. I lent her £2 but had only £2.10.0 in my possession. She heard of a situation to go to some very great gentry but she couldn’t speak English well enough …. a plan to apprentice her to a dressmaker and milliner, a Quaker, a highly respected person who promises to be a mother to her but she will have to give £24 and have food and drink and buy clothes. She will learn English in spite of herself. There is nobody there who can speak Welsh and you know that girls can’t go without talking even if it were French.

Concerning the shop of which I spoke I think it must have been a weak time on the moon, I had a weakness in my head to talk of such a thing but I wasn’t feeling very well and had home sickness. I thought of chucking up Liverpool but things are better now. Nothing bothers me except the smallness of my wages.

April 5 to John “About Ellin she is very poorly … badly in need of money to pay for her keep and she wants clothes.” He asks for £5.

We three were together last Sunday walking after chapel three miles into the country and talking about you often and about Grandfather and Grandmother.

Grace has a good place more comfortable than Ellin: Very heavy work she has to do, there isn’t much pleasure where there are nine or ten children. The steam-packet Chester burst on Sunday and many were scalded. A great many dogs killed here every day for fear they may have rabies.

…fortunate you are with my uncle instead of being a Slave among these English devils, swearing and cursing and never go to church or chapel nor ever think of God Almighty. Better potatoes and milk in Llanuwchillyn than roast beef and wine in London. I am in a good place with Mrs. Edwards, family prayers evening and morning … keep your heart up, dear little Ellin.

April 3. From Grace, Liverpool to John, “Why doesn’t Ellin write.” Asks for £3. “Everything is frightful.”

April 6. From Humphrey. “Dear Uncle, Here I am out of a place without one halfpenny in my pocket and my old master gives me every name except thief.”

THRILLED
May 13: He writes from London to Grace at Bala for a lock of Ellin’s hair. He warns her against marrying someone “not respectable and penniless”:

Last Sunday I saw Ellin’s old sweetheart, he looked very serious when he saw me. Dear Grace take care of yourself, do not listen to chaps who are like I was myself, silly and making fools of girls like you.

He begs Grace not to go back to Liverpool. “Come here dear sister, I like this place better every day.” He is thrilled by the preaching of John Elias, the most famous of Welsh preachers.

September 2. John to Grace. “Humphrey has left his place and is in great need of money. I sent him £10.”

After which the volatile twenty-one year old fades from view till his death in 1845.

Whether or not a Welsh chapel awaited Simon’s sons, Edward and Simon, in Sheffield mattered little, for they were strong and self-reliant.

Simon returned to Bala and married Grace in 1835. He took part in Radical politics and in the teetotal movement which had begun in 1832, perhaps as a reaction against forty three quarts of ale at a funeral. He was said to be the best speaker in North Wales.

The 1832 epidemic was generally held to be a Divine Visitation for sin, and as there was plenty of sin about, what with the Reform Bill and people not wanting to keep in their proper station, this seems very likely. 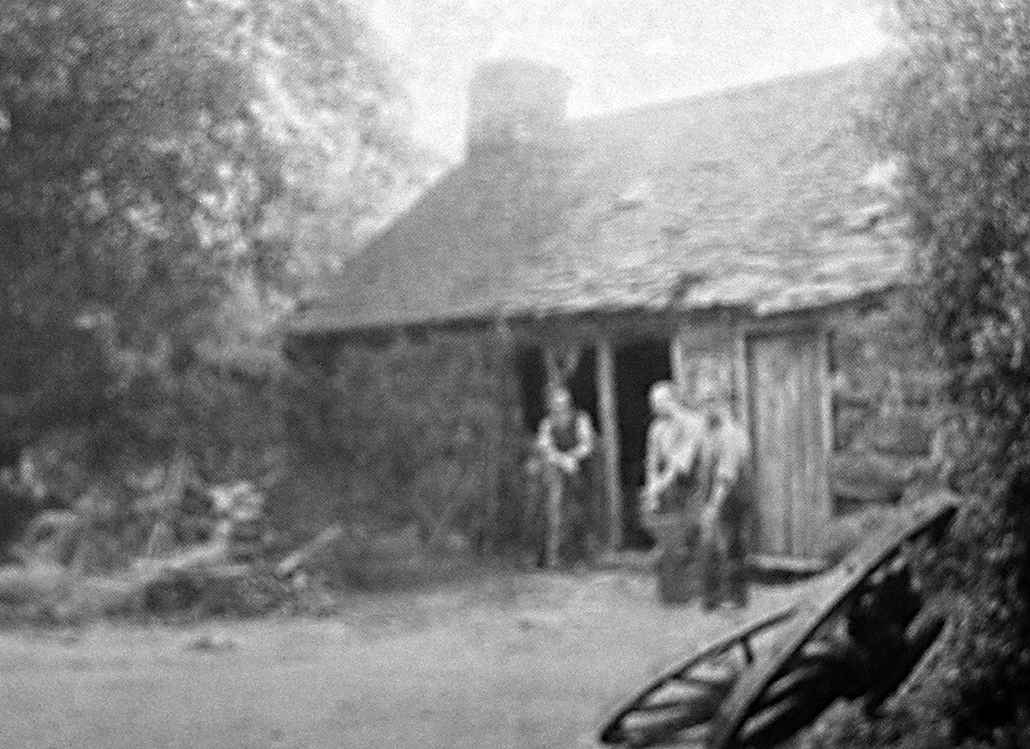 Efail y Lôn (The forge at the Lane), from Gwaith Ap Vychan (1903) by O.M. Edwards, who seems to think this was Old Simon Jones’ smithy.

Simon and Mary [Jones of Lôn] survived all the children except Grace and Simon. Their daughter Mary died in 1846, Edward, at Sheffield, in the same year, Thomas in Utica in 1847.

These were years of the great potato famine, when the starving Irish millions fled across the seas.

With them went their travelling companion Typhus, so that death followed them into the overcrowded ships, and into the ports and cities of America and Britain, seeming to echo Petrarch’s lines:

Life flies and will not stay an hour
And Death with hurrying footsteps follows fast.6

They came to Cardiff, Liverpool, London. Utica was one of the places to which they went from New York (Woodham Smith, “The Great Hunger”) and carried with them typhus, dysentery, even cholera.

Grace lived until 1870 and Simon until 1873. Did they, looking down from the Elysian Fields, in 1917, see their grandson [Arthur Tryweryn ApSimon] mortally wounded, dying with the Welsh at Pilchem Ridge?

Religion played a great part in the lives of these people, comforting them with glimpses of a world elsewhere. Halevy had described the early Welsh preachers as illiterate enthusiasts.

By 1860 there was a Theological College at Bala where the philosophy of Hegel buttressed the Faith, giving the students evangelical, teetotal and Hegelian, an edge on classically educated Anglican divines, who still stuck to Pusey, port and Plato.7