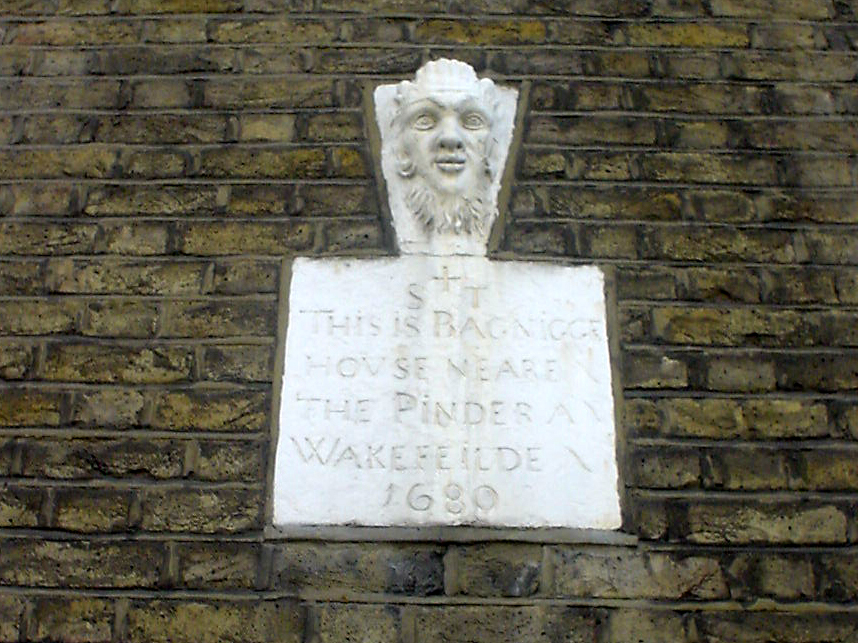 The monument in 2005. Image: Diamond Geezer.

This used to puzzle me when I walked past it years ago, and when I encountered it again during lockdown prampushing I decided enough was enough. Its current site at 61-63 Kings Cross Road, on the now subterranean course of the River Fleet, is more or less the spot where the plaque and perhaps another head were displayed in or after 1680, namely a gateway of Bagnigge (“Bagg-nidge”[1]Says Robert Mitchell, great-grandson of the landlord of the Bagnigge Wells Tavern.) House giving onto the same section of road, called Black Mary’s Hole on John Rocque’s 1746 map of London and subsequently Bagnigge Wells Road: 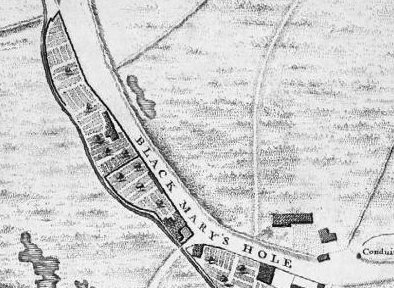 The house and gardens shown here opposite Bagnall’s/Bagnigge Marsh/Wash adjoining what is now Wharton Street, which heads NW up onto Clerkenwell Mount, seem to have been built by the London goldsmith Simon Thriscrosse in around 1680. Here are relevant entries from the Cantelowes (Manor) Court Rolls for 1666-1689, in which the editors give Bayles and Baggs as synonyms of Bagleys, to which I suggest adding Bagnigge:[2]Transcribed by Percy Lovell and William McB. Marcham and retyped and edited by John Richardson of the Camden History Society.

This would explain the initials S.T. and the Greek cross (a visual pun) on the inscription (note that I haven’t found a way to represent the dotted i in small caps):

The Pinder of Wakefield (“Pindar” in Daniel Defoe’s picaresque Colonel Jack (1722)) was a tavern, in which Thriscrosse and/or Cooke may have had business interest, “in the Gray’s Inn Road, near Chad’s Well … for the reception and entertainment of waggoners and other travellers on their way to London,”[5]William J. Pinks, ed. Edward J. Wood, The History of Clerkenwell (1881). named after George a Green, bailiff of stray animals, who beat Robin Hood and was then invited to join his band:

In Wakefield there lives a jolly pinder,
In Wakefield, all on a green.
“There is neither knight nor squire,” said the pinder,
“Nor barron that is so bold,
Dare make a trespasse to the town of Wakefield,
But his pledge goes to the pinfold.”
All this beheard three wight young men,
‘Twas Robin Hood, Scarlet, and John;
With that they spyed the jolly pinder,
As he sate under a thorn.[6]”The Jolly Pinder of Wakefield” in Stephen Knight & Thomas H. Ohlgren (eds.), Robin Hood and Other Outlaw Tales (1997)

But what of the face? Here follows a chronological sequence of the historical images I have found, which lead me to the following hypothesis: that the original relief showed Thriscrosse and had disappeared by 1850ish, whereupon, driven by Godwin’s article, and following the recutting of the lettering which he mentions, it was replaced by another, which may have sought to evoke the folklore that Nell Gwyn entertained Charles II in her country house here and/or the excesses of the Bagnigge Wells spa in its heyday in the late 18th and early 19th centuries. [7]I think the first reference to Gwyn in this particular place is in Leman Thomas Rede II’s Anecdotes & Biography (1799), and wonder whether the story was invented, or at least embellished, by the notoriously impecunious Rede on behalf of the promotors of the Bagnigge Wells Spa, which was active here from the 1760s. Note also that the graffiti next to the gate in the Archer image seems to read “fuzzy muzzy” -“hairy fanny”(?), which again might be interpreted as referring to the Merry Monarch’s orange girl and/or to later ladies. See John Ashton, The Fleet. Its Rivers, Prison, and Marriages for the cult of inventing connections between commercial premises and Nell.

Maybe someone else can come up with something better.

It is often said that Bagnigge Wells’ function as a place of entertainment commenced when its name and the associated spa features were introduced in the 1760s, triggered by some advertorial puff by one Dr. John Bevis, An experimental enquiry concerning the contents, qualities, and medicinal virtues, of the two mineral waters, lately discovered at Bagnigge Wells, near London (1760).

However, Henry Benjamin Wheatley writes in London Past and Present that George Bickham Jnr.’s The Musical Entertainer (ca. 1738) shows one Tom Hippersley singing to the company there (no time to check), and the first known biography of a wigger, advertised in The Gentleman’s Magazine in 1732, suggests that this was a mere upgrade to a well-established bawdy drinking house at Black Mary’s Hole:

The Delightful Adventures of Honest John Cole, that merry Old Soul. Who from his Antipathy to every Thing that is White, became President of the Japanner’s Company and afterwards Chairman to the Chimney-Sweeper’s Society; and at length instituted Patron of the merry Blacks of Waltham. His Intrigues with several Black-ey’d Girls at Black Mary’s Hole, and Marriage to a Blackmore at Blackswall, and becoming a Blackwell Hall Factor With several Cole-Black Jokes, Brown Jokes, and Jokes as sweet as Honey. Together with diverting Songs, his Death and Burial, which was on Black-Heath, under a Black Thorn; and his Epitaph, wrote by a Colamantee Negro from Antegoa, nam’d Diego in the Creolian Stile and Language.

Jack Sprat’s Black Cat had but one Ear,
Joan Coal’s Black Hole, take a View there.

By a Tippling Philosopher of the Royal Society [William Oldisworth].
Printed for R. Montague.

Curiously this work does not seem to have been reprinted recently.

Old and New London (1878) points to some fine doggerel from the spa’s heyday. For example, from David Garrick and George Colman Jnr.’s Bon Ton:

Ah, I loves life and all the joy it yields-
Says Madam Fusseck, warm from Spitalfields.
Bone Tone’s the space ‘twixt Saturday and Monday,
And riding in a one-horse chair on Sunday,
‘Tis drinking tea on summer’s afternoons
At Bagnigge Wells, with china and gilt spoons.

And “The ‘Prentice to his Mistress”

Diamond Geezer has also been there, as has Passage Walks, and Twitter can’t stay away, etc. etc. But I must a-bed.