Skip to content
Disputes that in England might be settled by single combat (thanks Transblawg) are often resolved here using anonymous notes left in the entrance hall: We request of a resident of this building (specifically of the rear façade) that out of consideration for the [right to] rest of the remaining residents she moderate her tone of… 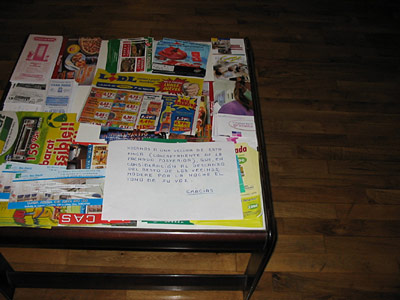 The info now includes links to a map and transport information, since no one seems ever to have been to Cornellà, even when José Montilla was still mayor.
A lot of people still believe this, and a lot of people have a powerful vested interest in them continuing to do so.

eCuaderno on the Spanish press’s RSS-lag.
The Spanish securities market commission wants an end to politicising of its activities, it says. So why, then, with the referendum two months away, is it displaying a prominent link on its homepage to a government pro-European constitution site?