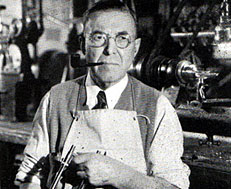 A snip at $250K, via Dave. The photo of Jake Burkle reminds one that, for all their Portuguese ukelele folk hero trappings, Sousa and his people were essentially industrial pioneers. Amusing detail, from William L Bird, “Better Living”: Advertising, Media, and the New Vocabulary of Business Leadership, 1935-1955: Arthur Pryor’s son, Arthur, was hired by Roy S Durstine at NBC, where he

became the link between the emergent technique of dramatic radio production and the music of Sousa, Gilmore, and others of his father’s generation, whose performance in an earlier day expressed values that heretofore could only have been expressed verbally. Hired to head the BDO radio department in 1927, Pryor either directed or oversaw the development of the General Motors Family Party, Standard Oil of New York’s Soconyland Sketches (1928), GM’s Parade of the States (1931), DuPont’s Cavalcade of America (1935), and other culturally reassuring entertainments.

Soconyland Sketches had, of course, nothing to do with Coney Island, nor, even more remote, with Senior’s Coon Band Contest; instead it promoted rugged American values, and not in the sense of a comfy carpet, my dears.