Skip to content
Neocon ex-blogger Joan Txàpal is apparently befouling the walls of his neighbourhood in imitation of the squatter scum he so claimed to loathe. The cops should crack down (pepper spray, taser, TV3) without delay on this illegitimate privatisation of public space. (Photo: JD. Next up: smoking his way out of the recession) 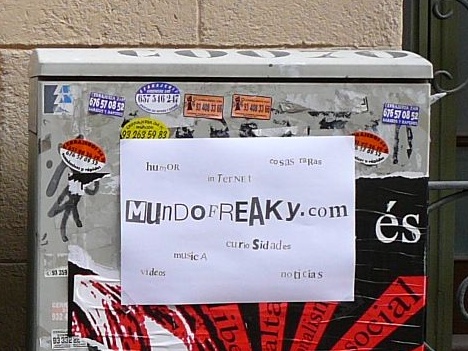 A journey through the remains of Expo 92. At least it hasn’t all been stolen, as tended to happen to unguarded buildings in Andalusia during the construction boom.
It would be Å vankmajer-nice to think that the wide-scale conversion of Spanish country restaurants into brothels is the logical, albeit unexpected consequence of a social craze for abandoning what is feared to be cultural in favour of what is assumed to be natural. However, the replacement of cooks by pimps means that we have not…