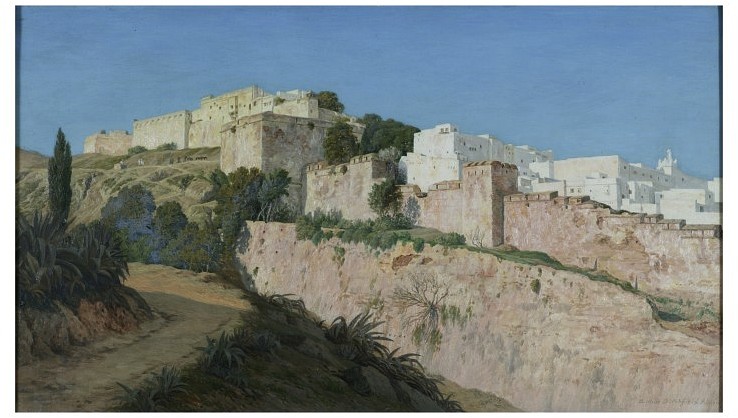 Arthur Ditchfield, The Casbah and the Ravine of the Centaur, Algiers (1873), at the V&A

There’s a rather strange blog out there which tells us that “Ernst Jünger‘s life and later works can function as excellent road maps to freedom and fulfilment in the modern world.” One of their remarkable ideas is that Steve Jobs was working along the lines of a Jünger blueprint when he came up with the iPhone 4. In a recent post they quote from a description of the phonophore in Jünger’s Heliopolis (1949): a smart wireless pod which offers P2P connectivity for the inhabitants of “workers’ world” as well as a constant flow of information between these worker-ant super-men and centralised servers, providing them with a comprehensive range of range of services (media, financial, geo, etc) and the bureacracy with the user inputs required to administer mobocracy effectively.

Given what’s happening in North Africa and Jünger’s interest in communications technology and government, I guess a post on his Eumeswil (1977) is on the way. This pseudo-novel describes a future dystopian city-state imbued with a multitude of motifs from several millennia of Mediterranean-inspired political culture and ruled by the Condor from his eyrie, the Casbah. Like Atlantis it is located along North Africa’s Atlantic coast, and like Plato’s fiction it serves as a springboard for a discussion of power and government (which of course may not prevent loons from looking for it in several thousand years times).

Among the profuse notes made by Martin Venator, bartender-historian to the dictator, are descriptions of the strategies adopted the Domo, the head of the dictator’s security apparatus, to defeat rebellions by the quasi-democratic Tribunes. So (trans Joachim Neugroschel):

[T]he Domo wanted law students to master language as a logical instrument in order to be able to pass judgements: nothing is further from his mind than aesthetic or even artistic sentiments, with the exception of music.

Tyranny must value a sound administration of justice in private matters. This … increases its political authority … which rests on equality, to which tyranny sacrifices freedom. Tyranny is intent on overall leveling, which makes it akin to rule by the people. Both structures produce similar forms. They share a distaste for elites that nurture their own language and recognize themselves in it; poets are even hated.

Monoculturalism was standard 20th century socialist/fascist fare, and so I imagine Seif El Islam Gaddafi was reaffirming his progressive outlook and popular roots rather than suggesting a diglossic divide between ruler and ruled when he announced that his ramble to the people on Sunday would be “in Libyan dialect” (first heard @ Al Jazeera @ 1:00 AM, refuted here (via)). On the other hand, Mubarak and Ben Ali’s marketing was straightforward conservative-authoritarian, which might explain why the former stuck with Modern Standard Arabic until the end, and why the latter’s stated intention of using Darija as the axe fell seemed so bizarre.

To Venator’s regret the popular language is that inherited from the liberal tyranny:

In a period of decline, when it was considered glorious to have helped destroy one’s own nation, the roots of language were, not surprisingly, likewise pruned, above all in Eumeswil. Loss of history and decay of language are mutual determinants; the Eumenists championed both. They felt called upon to defoliate language on the one hand and to gain prestige for slang on the other hand. Thus, down below they robbed the populace of language and, with it, poetry, on the pretext that they were facilitating speech; while on the heights they presented their “mugs.”

The assault on evolved language and on grammar, on script and signs, is part of the simplification that has gone down in history as a cultural revolution…

The result is a disconnect between the policeman and the policed:

The Domo’s meticulous use of language contrasts strangely with the way it is routinely mangled in Eumeswil. Hackneyed phrases are all that we hear–as well worn as pennies tossed to beggars; and, indeed, they come more from academics than from the harbor or the market. This has not always been so; the farmer, the artisan, the hunter, the soldier, the crook knew how to animate powerful images.

The fellah period has made a clean sweep of such talents. Eumenists of Sperling’s and Kessmüller’s cast have done their bit. The goal was the annihilation of correct language. “Le style, c’est l’homme“–this notion was revoked; intellectual rank was no longer to be identified by a mastery of language. The result is a banal chitchat defective in both its heights and its depths.

To be sure, there were errors in calculation. Even in times when there are no cabinetmakers left, one still distinguishes the well-built armoire, or even a planed board, from all the others. Similarly, when elites have grown rare or shrunk down to a few individuals, the clear, unadulterated word convinces the uneducated man–indeed, precisely him, the non-miseducated man. He senses–and this puts his mind at ease–that the ruler still observes rules despite his power. Caesar non supra grammaticos. A solace in periods of decline.

It would have been cool to have been able to compare Gaddafi’s interior minister Abdul Fattah Younis with the Domo, but it doesn’t sound like we’re going to be seeing him again. Vis-à-vis the Condor, one of Gaddafi’s errors was perhaps that he talked rather too much. Jünger creates a far greater sense of awe around his dictator by having him speak through his minions (who can always be fed to the lions if the public doesn’t appreciate the message). Afaik the only time we get a hint of the Condor’s words or intonation is near the beginning:

When I, like anyone having business in his proximity, was introduced to the Condor, he picked out his name for me. “Manuel, Manuelo, Emanuelo”–depending on the phonetic context. His way of distinguishing and modulating deepens the effect when he addresses people. In the agora, the how is even more important than the what, the delivery more powerful than the facts that it can alter, indeed create.

I guess that the stress on presentation is one thing that won’t change in Libya, whether the Gaddafi clan are succeeded by liberal republicans or, breaking with Eumeswil, by a slightly less deranged military government in Tripolitania with in Cyrenaica an Egyptian or Iranian client.