Mr Chappell has been rude about us again, but I figure I can take insults from a man who comes from a region where they marry their infant cousins because the ovens aren’t big enough to cook them. This is what he says:

They banned smoking in pubs in Ireland. That’ll go over great there. Every single person I have ever seen in a Irish pub smokes. A lot. And bums cigs off you, because here’s a dirty little secret: it’s not just the Scots who are skinflints, it’s 99% of residents of the British Isles.

Ooh! Aah! Still, it’s one worth refuting, even for a (slightly tipsy) trombonist. I hope no one will be offended that I ignore Ireland for now – it’s just that British data is much easier to find.

A prerequisite for giving is not saving, and here the US gets off to a head start, even if you factor in wealth held in businesses and that kind of stuff. This chart, from Attanasio & Banks, Trends in Household Saving (IFS, 1998), shows average private savings rates in the US and the UK between 1950 and 1995: 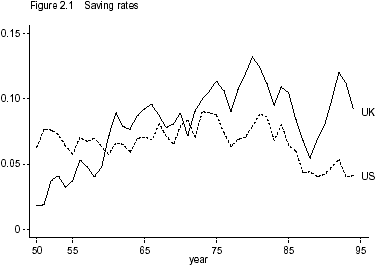 On that basis, the British start looking like skinflints, but wait: what are Americans doing with all that money they don’t save? Are they spending it on improving the world, on helping their fellow (wo)man? Not for a moment: it’s all going on guns, burgers and licker, just like you always thought. Says Karen Wright of the Centre for Civil Society at LSE in Generosity vs Altruism: Philanthropy and Charity in the US and UK (2000?; PDF):

In the United States, individual giving as a percentage of gross national or domestic product has consistently hovered around 2% of Gross Domestic Product (Independent Sector, AAFRC), and the recent strong stock market is helping that figure continue to climb. By contrast, charitable giving in the United Kingdom has yet to reach 1% of GDP; various strategies, including a number imported from the US, have not been able to move that percentage significantly higher, and giving levels are in fact declining.

Bugger, she wasn’t meant to say that. Granted, philanthropy is still a dirty word in the UK, where people have tended to vote for state provision, and granted that religious donations are much more difficult to smuggle through in the UK, but it still doesn’t look good. Time to change the subject.

Although there are huge differences between the ways in which giving takes place in the US and in the UK, I still think the most interesting difference (which is one of degree) remains that between societies that in general believe in vigorous intervention in markets and noisy public begging and those that put their faith in two invisible hands:

Basically there’s been a bloke standing under my window for the past week shouting at the top of his voice a bizarre medley of quasi-religious chants. We held a collection to see if we could pay him to go away, but I think he’s scented a pension in the offing. He’ll be back at 08:00, so it’s time I got some sleep.