And “beurette,” of course, this being the Year of Zahia Dehar, who sounds like she may escape from being shagged up the bum by Pierre Woodman. 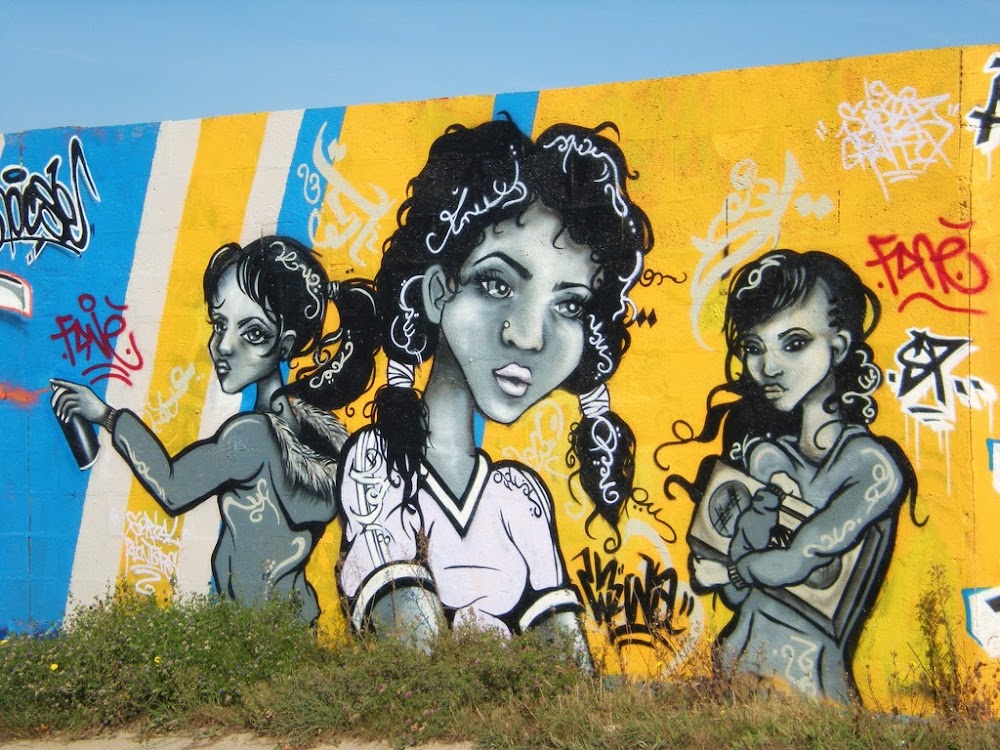 Beurettes with their backs against the wall in Aytré, Poitou-Charentes, CC by Thierry Llansades.

Beur—beurette is the feminine diminutive–is used to refer to a descendant of North-African immigrants, and “beber23” contribution comes from the world of verlan, a argot particularly associated with France’s Maghrebi ghettos which has moved up and out on the back of leftist and more recently Sarkozyan beur-is-beautiful cultural and political opportunism. Having too much in common with standard French to qualify as a hard-line secret language, it features phonetic transformations of French words and is often larded with North-Africanisms. Wikipedia says that the transformation rules are generally as in this standard account of how arabe became beur, although only item 4 is indispensable (verlan is the inverse of l’envers, ho ho ho):

Another form also exists, rebeu, which is said to be a transformation of beur, and Maurice Tournier writes in Propos d’étymologie sociale. Tome 2, Des mots en politique that alliteration may play a role in determining which to use (eg “rebeus et renois” vs “blacks, beurs et blancs”).

And, using this other form, the then president of Radio Beur Nacer Kettane, quoted in Immigration and identity in Beur fiction by Alec G Hargreaves says that the transformation is arabe > rebeu > beur instead of arabe > beur > rebeu:

Whatever the case, I find it bizarre that beur, a word which is mainly applied to people of Berber descent and which is phonetically near-identical to one syllable of the name given to them in Arabic (Ø¨ÙŽØ±Ø¨ÙŽØ± – cf eg the English standard pronunciation, or the pronunciation suggestion, “beurbeur,” in Théodore Roland de Bussy’s 1838L’idiome d’Alger, and the frequent use of “beurbeur” as an online nick by French-Berber youth), is said instead to come from arabe. Hargreaves picks up this point:

A number of commentators [Jean Déjeux, Hédi Bouraoui] have suggested that rather than being a piece of verlan, ‘Beur’ may be a contraction of ‘Berbères d’Europe’… There is, however, no evidence to support this view from within the immigrant community itself. It is true that Kettane, like most of the other founding members of Radio Beur, is of Berber origin, but all agree that the self-designation ‘Beur’ is a verlanesque adaptation of ‘Arabe’.

Beur refers both to a geographic and cultural space, the Maghreb, and to a social space, that of the banlieue and the proletariat in France.

Maghreb is Arabic for sunset or where it happens, and hence inter alia for the north coast of Africa, to the west of the Arab heartland. While I think the region was generally described as North Africa pre-decolonisation, and while I think that Kabyle/Amazigh regionalists/nationalists now tend to use that term again to remind us that the aboriginals west and south of Egypt were called by the Arabs precisely to indicate that they were not Arabs (eg OED:Berber), I also believe that it was de rigueur among the class that came to power in Algeria to use “Maghrib”, partly because Arabic was the only sensible alternative to French as the adminstrative language, and partly in order to foster the illusion of pan-Arab unity.

Instead of rambling on, it would be interesting to hear from someone who actually knows something about this, so stuff like: