“¡Dale al asno!” ruled out in the first round. 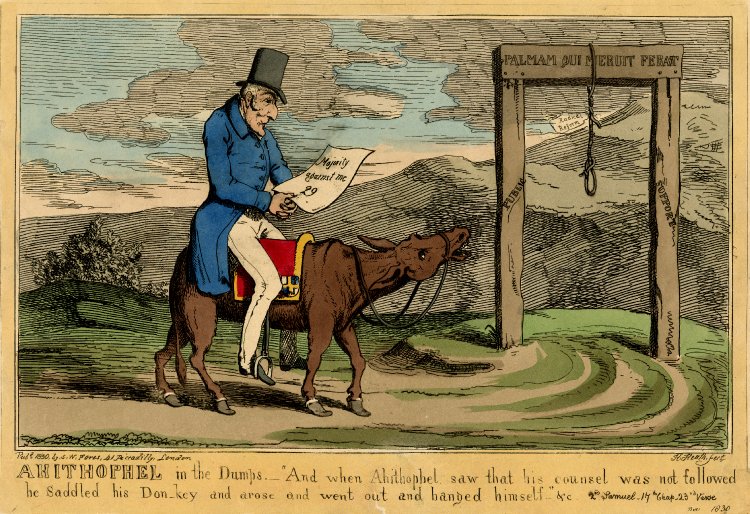 No woman, still die: a travesty of Henry Heath's Ahithophel [Wellington] in the dumps.

Someone asked me for an idiomatic translation of Todd Beamer’s glorious battle-cry that would evoke almost certainly fatal action as a preferable alternative to certain passive death. One idea that didn’t get close enough in terms of meaning, solemnity, or anything really was “¡Dadle al asno!”, whose origins Covarrubias, Tesoro de la lengua castellana, o española (1611) describes:

A well-built lad was being taken to be hung when a woman came out of a brothel, saying she wanted him for her husband. Everyone halted happily, thinking they would save him from the gallows. The woman arrived, and he, seeing that she was ugly and abominable, turned to the executioner and said, “Whack the donkey!”

I don’t think my mad ideas are any worse now than in the phase when I managed to sell a few of them, so I’m putting it down to the new boredom that Bicing has still failed to implement my (free) scheme to achieve optimal and environment- and people-friendly load-balancing by raising downhill tariffs and paying homeless and jobless Senegalese small amounts to pedal the crocks of uphill again.