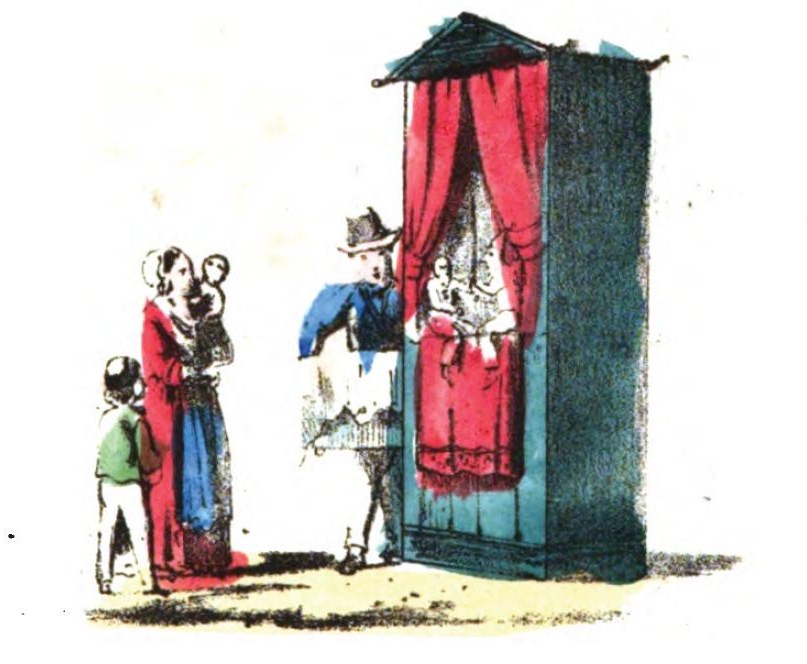 Forget the foot fetishism: Madame Bovary is Punch's role-reversed Judy (Jan Klaassen show above) and Lheureux the dog that drags her to Hell.

Last night, extracting bits from mainly 19th century barrel organ observation and invention, one lost one’s mind to metaphorical mirage: cylinders (circular tragedies framed by the appearance of organ grinders), pins (all the world’s a barrel organ), and, above all, (demonic) monkeys. Here’s J.L. van der Vliet in 1845 in a piece of that most Dutch genre, Gothic humour, which covers inter alia the vendors and performers of murder ballads:

Victor Hugo says somewhere that while the public prosecutor is writing his closing speech for the judges, the executioner sits in a basket under the table and now and then tugs on his legs, so that each time His Inclemency has to kick the basket and cry to him, “Quiet man! Thou also shalt have something!”

I haven’t looked for the Hugo source, but I imagine the Biblical tint is there too. Thomas Marshall (1842) translates the honorific “Hoog-Gestrenge” as “Most Honorable” or “Most Just”, which is inadequate here; however, though while one suspects that Calvin and Zwingli had a weakness for strong-armed whipsters, we are not yet in the punishment cellar.

How many monkeys would have to be deployed with Ian Horswill’s Punch and Judy AI Playset for how long in order to generate Madame Bovary?