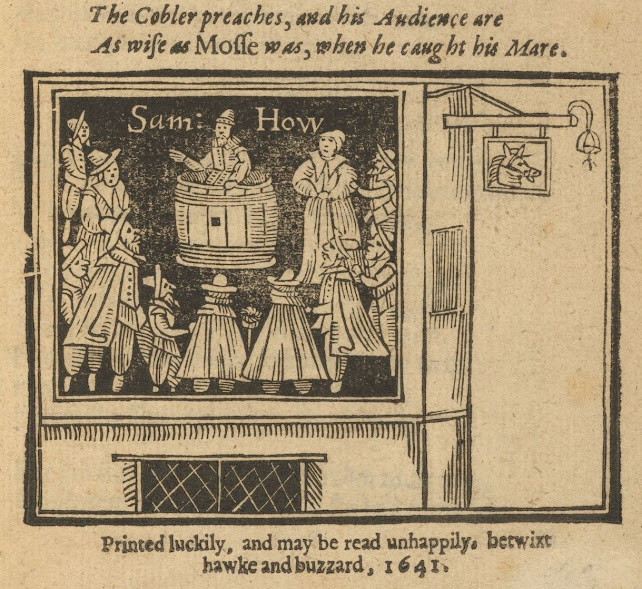 Historically, a decline in doggerel has been a pretty good predictor of doom – take the eclipse of nice, funny people like Taylor and Clarence Day by dull sloganeers like respectively John Milton and W.H. Auden. The opposite is also true: the recovery of Punch in the 1940s from its 1930s nadir was a sign that things were about to get better.

Let’s take a look at more recent events. From 1979, here’s Cornelius Cardew with some great doggerel and an Albanian X Factor-winning performance:

Persisting in the face of every difficulty
In 1979 was formed our new party, a glorious victory.
Rallying to this flag is the only way, workers
To usher in, a bright new day of
Socialism in Britain.

A decade later, with Cardew assassinated by a CIA milk float, things had declined. Apparently Rick Astley said on the Jo Whiley show the other night that when he topped the charts in the States he felt that his life was done: somewhere Luther Vandross would be driving to a gig and would hear Rick on the radio, and even if he didn’t like what he had heard, then he had at least heard it. Here’s Luther being rather excellent, despite lyrics that don’t even aspire to doggerel:

I was reminded of this the other night by the 2015 film known as Macbeth. Where Luther was capable of making some pretty poor material feel almost proximate to doggerel, Justin Kurzel and his accomplices turn some of the finest doggerel in the English language into undifferentiated suburban gibberish. Shakespeare’s Macbeth indicates a speaker’s class by having the posh people use unrhymed iambic pentameter aka blank verse, the commoners, prose, and the witches, rhymed trochaic tetrameter. But Kurzel tries to conceal the words behind impenetrable accents and loud music and sound effects – it’s literally a tale full of sound and fury – and to destroy their power and meaning when they are audible and comprehensible. Here’s Michael Fassbender as Macbuff, shambling through the tomorrow soliloquy:

I mean, they even leave out “Double, double toil and trouble.” Here by contrast is Warner Bros.’ Looney Tunes A Witch’s Tangled Hare (1959) featuring Bugs Bunny:

Great doggerel, great performance, not much of that in prospect this Sunday or in times to come. [Cue subsidiary rant on decline of oral poetry.]

John Taylor (1578–1653) was an English poet who dubbed himself “The Water Poet”. After his waterman apprenticeship he served in Essex’s fleet, and was present at Flores in 1597 and at the siege of Cadiz.

Taylor is one of the few credited early authors of a palindrome: in 1614, he wrote “Lewd did I live, & evil I did dwel.” He wrote a poem about Thomas Parr, a man who supposedly lived to the age of 152. He was also the author of a constructed language called Barmoodan.

He achieved notoriety by a series of eccentric journeys: for example, he travelled from London to Queenborough in a paper boat with two stockfish tied to canes for oars, described in “The Praise of Hemp-Seed.” He had more than sixteen hundred subscribers to The Pennylesse Pilgrimage; or, the Moneylesse Perambulation of John Taylor, alias the Kings Magesties Water-Poet; How He TRAVAILED on Foot from London to Edenborough in Scotland, Not Carrying any Money To or Fro, Neither Begging, Borrowing, or Asking Meate, Drinke, or Lodging., published in 1618. Those who defaulted on the subscription were chided the following year in a scathing brochure entitled A Kicksey Winsey, or, A Lerry Come-Twang, which he issued in the following year:

By wondrous accident perchance one may
Grope out a needle in a load of hay;
And though a white crow be exceedingly rare,
A blind man may, by fortune, catch a hare.

He was the first poet to mention the deaths of William Shakespeare and Francis Beaumont in print, in his 1620 poem, “The Praise of Hemp-seed”:

In paper, many a poet now survives
Or else their lines had perish’d with their lives.
Old Chaucer, Gower, and Sir Thomas More,
Sir Philip Sidney, who the laurel wore,
Spenser, and Shakespeare did in art excell,
Sir Edward Dyer, Greene, Nash, Daniel.
Sylvester, Beaumont, Sir John Harrington,
Forgetfulness their works would over run
But that in paper they immortally
Do live in spite of death, and cannot die