Eurotopia–a Europe consisting of a host of regional statelets–is actually 15 years old, and was produced by historian Henk Wesseling on request of beer magnate Freddy Heineken as a systematic response to the gradual decline in the efficacy of large (multi-)nation-states. He’s not proposing new, mini-nation states as desired by the less crazy Cataloonies, and certainly not the mammoth new mega-nation-state favoured by madmen like Pasqual Maragall, simply a more manageable administrative division for both Brussels and citizens: 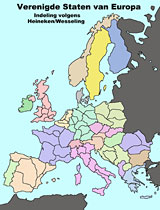 Nice try, but Wesseling himself recalls asking Heineken what would happen to his friendship with Mitterand if he proposed chopping France into seven or eight. Unlike his colleague across the Pyrenees, Sarkozy does seem to have a reasonably sensible concept of the purpose of the state, but it’s difficult to imagine him reacting in any other way.