Photo 7 on this page shows a lamb being carried by refugees from villages on the Spanish side of the central Pyrenees as the Stalinist-led 43rd Division prepared its famous last stand–the Bielsa Pocket/la Bolsa de Bielsa–against Franco’s advancing Navarrans in spring 1938. Bielsa was completely shattered by the latter’s artillery, but the scorched earth tactics of the former meant that one might regard the people in the photograph as having been fortunate. The subsequent sequestration of “troupeaux de milliers de bêtes, bovins, ovins, chevaux, mulets” by the republicans condemned villagers to quite extraordinary poverty well into the 1950s, with ankle-bound pieces of cowhide the only footwear for many. It is said that the houses with red roofs in villages in the Chistau valley are those which were burnt by retreating troops as the nationals came over the Puerto de Sahún to the east. 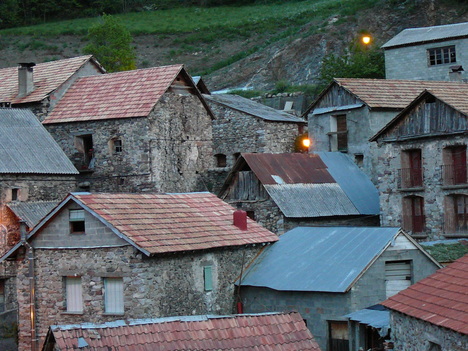