The most heartbreaking experience I’ve had recently was watching a smallholder digging up the vines he planted during the 60s and 70s boom. Brussels used to pay him subsidies to plant, but now they’ve said that he’ll only be able to earn money by destroying what they regard as his means of production but which for him are the story of his life–these, put in when his daughter was born, those, over there, when his nephew got married.

Andalusian government is not shy of irony, so while the brochure produced by the Ayuntamiento of Jerez de la Frontera with the support of Cajasol for their Fiestas de la Vendimia (Harvest Festival), is written in dreadful English and embraces a visual style which could easily and happily have been abandoned twenty years ago, I’d just like to focus on one little feature: 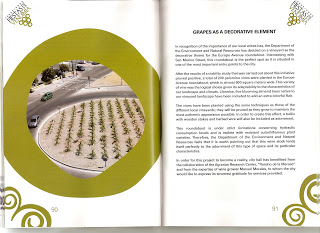 That’s right, they’ve spent what is probably a quite considerable sum of money on viability studies, landscape gardening, ongoing care etc etc to plant 200 completely ordinary vines on a completely ordinary roundabout. Who gets the quota? Will an underpass be built to prevent locals being killed as they harvest? Where and when will the buck stop?

(Many thanks to Anon for the scans. If you don’t want your name mentioned here, I’m also perfectly happy to link to the charity of your choice. Or something like that.)