As long as you work for it. 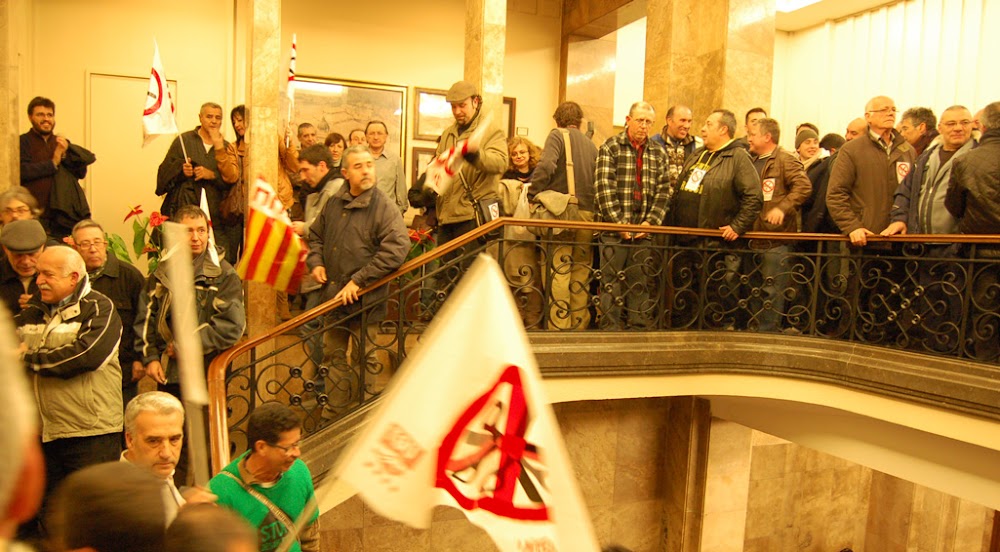 The local petanque club trade unionists fighting for the young and unemployed themselves, and fuck the rest, in Sabadell town hall in 2012. Image: iSabadell.

Given the way the world is changing, the British FCO’s extended leave arrangement – your old job back, no questions asked, as long as you return within a decade – seemed extraordinary enough. But Rubalcaba’s untested return to university chemistry teaching after a more-or-less total absence of 32 years is the clearest possible illustration of whom the state serves.

I rather liked the reasoning behind Theodore Dalrymple’s belief in Italian superiority (Our culture, what’s left of it):

The Italian public administration has traditionally had one saving grace by comparison with its British counterpart, however: its corruption.

Admittedly, corruption is a strange kind of virtue: but so is honesty in pursuit of useless or harmful ends. Corruption is generally held to be a vice, and viewed in the abstract, it is. But bad behaviour can sometimes have good effects, and good behaviour bad effects.

Where administration is light and bureaucracy small, bureaucratic honesty is an incomparable virtue; but where these are heavy and large, as in all modern European states, Britain and Italy not least among them, they burden and obstruct the inventive and energetic. Where bureaucrats are honest, no one can cut through their Laocoönian coils: their procedures, no matter how onerous, antiquated, or bloody-minded, must be endured patiently. Such bureaucrats can neither be hurried in their deliberations nor made to see common sense. Indeed, the very absurdity or pedantry of these deliberations is for them the guarantee of their own fair-mindedness, impartiality, and disinterest. To treat all people with equal contempt and indifference is the bureaucrat’s idea of equity.

In such circumstances, the use of personal influence or bribery by a petitioner at the bar of bureaucracy may actually represent an increase in efficiency. It would be better that the bureaucracy did not exist at all, of course; but it does exist and is unlikely soon to disappear. (My experience in Britain suggests that all official attempts to reduce bureaucracy actually increase it.) The man who can bribe or call upon the illicit influence of his brother-in-law is not obliged passively to await a decree from the bureaucratic Olympus: he retains some control over the situation (and also, therefore, some self-respect).

His sounds to me like a comparison of the shittier bits of London with Tuscan expat villa culture. But it was curious how Blairite sloganising about continental café culture (which in Britain was inevitably leading to Gin Lane until pub prices were raised so high that only trustafarians could afford to drink there) coincided with New Labour’s adoption of Italian political practice.

I tend to think of nonentity-TV, with its sacrificial corn-haired gods and æsses, as an extension of the Mediterranean cult of the sons and lovers of bull fighters and ballad singers. That may be unfair.

For the sake of my pension I’d love to work for the state or for the quasi-state (MNCs, Greenpeace, etc.) but it just sounds so bloody boring, and stupid.