The Venerable Bede said that whoever talks in church talks not with his own voice but with that of the devil within him, says Jerónimo de Alcalá in Alonso, mozo de muchos amos (1624).

Judging by David Jackson’s tale (taxes wasted on the signs alone: €37,752), and on past experience, ragamoffyn has a rich furrow of kissarsers in Almería.

Tunbridge Wells, on the other hand, is impeccably governed, and it’s a wonder we don’t all live there.

David takes what I think is the party line on descriptive toponyms, and it’s perfectly sensible:

[T]he main church, the Iglesia de la Virgen del Mar, has been signposted as the “Church of the Virgin of the Sea”. Try finding that in your guidebook,

… or by asking the locals.

But maybe another class of guidebook is needed: for virtual visitors, who, without learning the lingo, wish to relish provincial absurdities. I feel that those unfamiliar with the dialects employed in intergalactic Marianism would definitely like to know what this Virgin is up to: 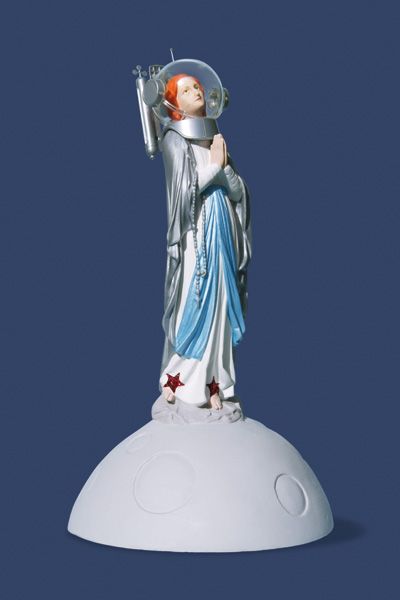 And Our Lady of Overactive Letdown should never be issued without her Vatican-approved user’s manual.

All of this via Lenox – sadly I long ago ceased to read the entire internet every morning before breakfast – who reports that Murcia is now sometimes Múrcia, as if they hadn’t got financial problems enough.