I think it’s from the Ukraine State Emergency Service, though it might also be a tribute to the Russian Ministry of Emergency Situations. 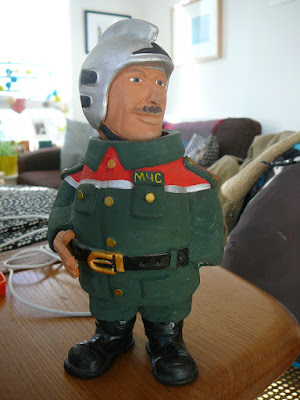 I thought at first that the ÐœÐ§Ð¡ acryonym referred to ÐœÐ§Ð¡ Ð Ð¾ÑÑÐ¸Ð¸/Ministry of Emergency Situations Russia, but the shoulder strap is a green, red and gold version of the ÐœÐ§Ð¡ Ð£ÐºÑ€Ð°Ð¸Ð½Ñ‹/State Emergency Service Ukraine lieutenant’s formation patch. The latter service cleared up the Chernobyl mess and has recently controversially (in view of the civil war) been reincorporated into the Ministry of Internal Affairs.

Found in a junk shop in Walthamstow, some parts of which are swarming with Eastern Europeans, a fair number of whom are Ukrainian, many of whom (according to the vendor) have (legally acquired) Polish passports. Complicated business, the European Union.

I’m getting the hang of the Russian alphabet – comes in handy on that side of the River Lea.

What am I offered?