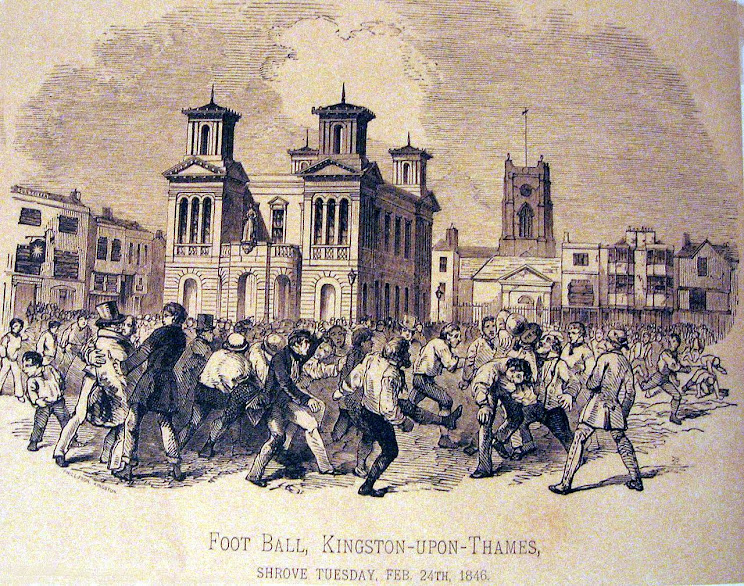 When, in the next few days, you are soundly thwacked by some Russians, you should celebrate inwardly and bless them, for you are the Father, they are the Son, and, although Freud didn’t quite get round to explaining this in his exposition of the Oedipus complex, the Holy Ghost is English football culture. Without you to show the way, they would still be fermenting potatoes in concrete bunkers,[1]How can hooliganism exist in a country without terraced houses? How can English provincials ever become modernists when they are surrounded from birth by the humble brick? dressed in Oriental smocks and clown pants, and gnawing at ursine off-cuts. There is no one in the world who they admire more than you, and that is why they must beat you so terribly.

The OED says that a hooligan is “a young street rough, a member of a street gang”:

The word first appears in print in daily newspaper police- court reports in the summer of 1898. Several accounts of the rise of the word, purporting to be based on first-hand evidence, attribute it to a misunderstanding or perversion of Hooley or Hooley’s gang, but no positive confirmation of this has been discovered. The name Hooligan figured in a music-hall song of the eighteen-nineties, which described the doings of a rowdy Irish family, and a comic Irish character of the name appeared in a series of adventures in Funny Folks.

Remarkably, the first Russian khuligans seem to have appeared in print either simultaneously or previously. Joan Neuberger, Hooliganism. Crime, Culture, and Power in St. Petersburg, 1900-1914 (1993) suggests 1898:

The first references to hooliganism in Russia usually made use of older native terms such as ozorstvo, which conveys a prankish mischievousness, or bezchinstvo, which includes defiance of rank. Most agree that the word hooligan was introduced into Russian usage in 1898 by I. V. Shklovskii in one of the monthly columns about life in England that he wrote for Russkoe bogatstvo (Russian Wealth) under the pen name Dioneo.[44] Before 1900 the word was rarely, if ever, used in print, and the phenomenon seldom noted.[45] Then in the first years of the century the word was quickly absorbed into common usage, replacing the older, inadequate terms.

However, Stanislav Panin, in a piece on hooliganism in the 1920s, writes that the Jewish Bolshevik criminologist and eugenicist Pavel Lyublinskiy claimed that the first citation of the word with this meaning is in Russian, not English. Apparently his Khuligan-stvo i ego sotsial’no-bytovyye formy. Khuliganstvo i khuligany (“Hooliganism and its socio-quotidian forms. Hooliganism and hooligans”), published in 1929 by the NKVD, says the term entered written Russian in a decree issued in 1892 by the new mayor of Petersburg, Victor von Wahl, to combat ruffians then terrorising Petersburg, and that the police popularised the word. Von Wahl was Baltic Lutheran nobility descended from 16th century Scottish emigration – “MacDowall” or “MacDougall of Makerstoun” from Galloway – and so I hope that some enterprising etymologist will show that “hooligan” has its origins in Galwegian Gaelic. Von Wahl was removed in 1895, allegedly following complaints from that notorious hooligan, the future Tsar Nicholas II.

Back to football, for I’m running out of World Cup.

The Russian WP entry says that football hooliganism took hold in the 1970s as fans of Spartak and then of other teams like Dynamo Kiev and Zenith Saint Petersburg began to travel to away matches. I get the sense elsewhere that fans proudly adopted the word hooligan from the authorities when their behaviour was vilified as anti-Soviet, rather as I think I recall Leeds fans chanting “We’re nothing but animals!” after some Sun or Mirror front page attack. Gorbachëv’s reforms in the 1980s seem to have allowed the movement to grow, but the collapse of the Soviet Union and league in 1991 terminated outings to Kiev, Tbilisi, Minsk and Vilnius, and entertainment for a while was restricted to the Muscovite derbies between CSKA and Spartak.

My impression is that Yeltsin’s katastroika programme of economic piratisation freed up money for the football circus (as well as for London pieds-à-terre), and that access to foreign media led Russian hooligans to imitate what they perceived to be the world-leading British model of fighting and fanzines: the Sunday Mirror’s “drunken, tattooed, crop-headed oafs.”[2]Emma Poulton (2005) English Media Representation of Football-related Disorder: ‘Brutal, Short-hand andSimplifying’?, Sport in Society: Cultures, Commerce, Media, Politics, 8:1, 27-47 The Russian firmy seem have taken off in the mid- to late-1990s in imitation of Alan Clarke’s 1989 The Firm:

Fast-forward to Green Street (hooligans) (2005), about an American who gets mixed up in West Ham’s Inter City Firm (ICF):

Utterly embarrassing, but it’s the inspiration for these lines:

Stand in line with your brother and don’t take one step back
Russian brigades, like a bumper, ram our opponent

And here, for an even smaller public, is the entire film, which was produced by Sergey Mikhaylovich Sel’yanov, who seems to have used political connections to hang onto reduced post-Soviet state subsidies for film-festival arty-fartiness while also releasing regime- and pan-Slavist-pleasing box-office material:

I don’t know how to translate the title. As this hooligan glossary tells us, the term encompasses everything related to fans, supporters and football hooliganism.[3]Most football argots suffer from a tendency to invent local terms for Anglosphere concepts neglected by cosmopolitan bleeding-heart liberal commentators, but Russian is happily rich in Anglicisms (same source as above): A.C.A.B., bas (bus), glorikhanter (glory hunter, fan who doesn’t mind who he watches as long as they win), kazual (fan who shies away from demonstrating his allegiance), mob ((territorial) group of fans, often forming part of a firm), sapporter, skam (scum), skin (skinhead), spotter (spy dedicated to tracking the opposition), taym, nulevoy (pre-match drinking, perhaps from “Time at the bar! Last orders, ladies and gentlemen!”), ferst layn (the first line is like the front row of a scrum), feyr pley (a (pre-arranged) fight under just terms), khardkor (shock troops), sharpist (member of the Skinheads Against Racial Prejudice movement) sharfist (fan wearing a scarf, or one more interested in gear than goals), shedvel (infiltration of fans into an opposing sector, from Shadwell, the fictional East London football team whose hooligans are joined by an undercover cop (Reece Dinsdale) in Philip Davis’ 1995 I.D.:

I was also very happy to discover menotavr (mounted policeman), and yermak, for a fan with unrealistic travel plans, which I take to refer to the 1990s Wild Eastern TV series of the same name about the 16th-century conquest of Siberia, whose title theme contains a splendid xylophone cameo recorded in the control room by the engineer’s infant child:

Literalisms like “Near football” aren’t going to put ar$eholes on seats. “‘Round Football” is my little joke – ha, bludy ha – referring to the rather different Tavernier film starring Dexter Gordon and based on Bud Powell and Lester Young:

More draft titles: “Kicking off,” not bad; “Offside,” weak and vague; “Soccergeddon” … Come on, I need something really silly.

Feduk, the rapper? Dull, not drill: