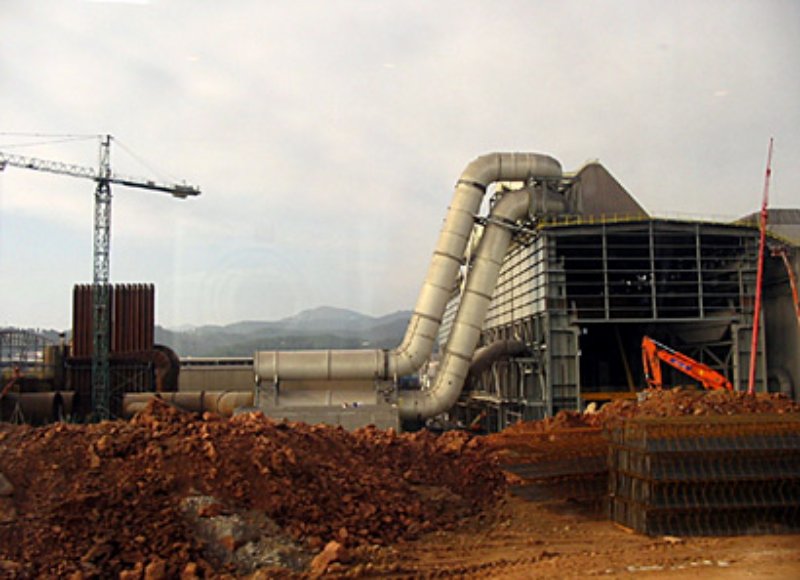 This is Celsa‘s bigger, badder steel recycling plant on the Castellbisbal side of the Llobregat, taken from the train on the way back from this wine tasting tour. You’d have to be quicker than me to get the satanic flames flickering inside. It makes me think of James Nasmyth‘s visit to Vesuvius in 1842 since I read that a couple of months ago:

What struck me most was the wonderfully brilliant colours of the rugged lava rocks forming the precipitous cliffs of the interior walls of the crater. These brilliant colours were the result of the sublimation and condensation on their surfaces of the combinations of sulphur and chloride of iron, quite as bright as if they had been painted with bright red, chrome, and all the most brilliant tints. Columns of all manner of chemical vapours ascended from the clefts and deep cracks, at the bottom of which I clearly saw the bright hot lava.
I rolled as big a mass of cool lava as I could to the edge of the crater and heaved it down; but I heard no sound. Doubtless the depth was vast, or it might probably have fallen into the molten lava, and thus made no noise. On leaving this horrible pit edge, I tied the card of the Bridgewater Foundry to a bit of lava and threw it in, as token of respectful civility to Vulcan, the head of our craft.

The environmental report (Catalan) issued by the regional government as part of the authorisation process. Basically it looks like they’ve just copied chunks of the Celsa engineer’s report and said come back in a year’s time: there’s stuff in there that is irrelevant to an environmental analysis and there’s little evidence of critical discussion of impacts. Local residents are probably more concerned about emissions into the air, but I’d like to know what the local environmental pressure group, Depana, thought about the estimated virtual doubling of water use (=> 2,000,000m3/pa) on a river at the mouth of which they want to reinvent a delta system.
[
the dictionary of the Institute of Catalan Studies says that fusa, one of the local translations of the English word “smelting”, used to be used up the coast in Blanes to mean the shove that you gave to a boat so that it slid off the sand and into the sea.
]