This morning’s revelations of a depression <=> Prozac symbiosis are nothing more than a variation on the old Guinness-is-good-for-you pub therapy industry. The trick is to recognise it as such and manage it effectively. While it is evident that Hank Williams failed in the latter respect, I think that one of his songs contains a remarkable recipe for the rest of us.

When John Dowland sang “Flow, my tears, fall from your springs!” he was setting the pattern for countless Cry me a rivers, in which the physical manifestation of misery takes its flight through one’s orbs, ne’er to return. Mr Williams appreciated the futility of this and wrote instead:

There’s a tear in my beer
’cause I’m cryin’ for you, dear
You are on my lonely mind

What Hank has figured out is that crying into one’s beer reduces its alcohol content so that one regains sobriety and, tears temporarily exhausted, can recommence: 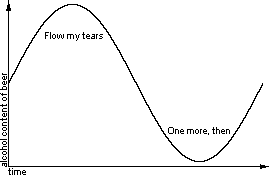 And there is no reason why–given food, sanitation, and a tolerant barman–this cycle should not continue more or less indefinitely. The only issue that still requires clarification is the ability of humans to ingest a million tears every nine beers or so. What is the mass of a tear?