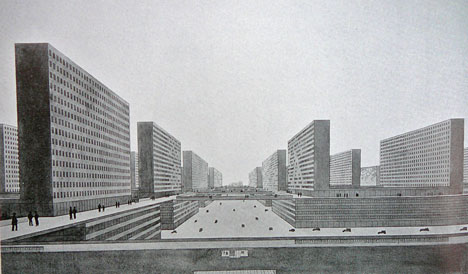 Actually Ludwig Hilberseimer, Entwurf für eine Hochhausstadt/Design for a high-rise city (1924). Hitler exported idealistic architects rather than bombs to the US. Hilberseimer ran the Chicago planning department for a while, and they and other public institutions have spent the last ten years tearing down projects built by him and other Bauhaus luminaries.

Enthusiasm in Barcelona for this kind of rubbish has been slower to wane, driven by neo-Eixample pack-em-in speculative deals between developers and councillors.

Pla’s loathing of the Eixample is usually taken as a sign of a village mentality, but Cerdà’s origins situate him even farther from civilisation–even at his least worst he was nothing more than a pig farmer on a roll.